Our journey through Sri Lanka’s hill country has been surprisingly relaxing.  No issues, no fights, just easy traveling.  Which means I was able to pack three days into one (long) blog.  Enjoy…

Merry Christmas!  I know – that didn’t even feel sincere as I typed it.   We all know I don’t give a shit about Christmas.  Rewind.  Happy free day off from work!  Yes, that one felt right.  Today we left Sigiriya at 6 am because we can sleep when we’re dead, and drove to Nuwara Eliya, also known as Sri Lanka’s “Little England”.  This part of the country is famous for its vast rolling hills of tea estates and abundant waterfalls.  The British brought tea to this area of Sri Lanka when they colonized it in the early 1800s.  They also brought people from India to work the tea fields, resulting in a prevalent Hindu population in this region.   All I know is that I got a delicious samosa for about 20 cents on the drive, so I’m not mad about it.  We also extended our driver, Pradeep, for another 4 days of our trip because he is awesome.  And because he cut us a deal.

The drive from Sigiriya to Nuwara Eliya takes about 5 hours along nauseatingly windy roads. We broke up the journey with several stops at your typical tourist traps.  First, Pradeep took us to a spice and herb garden where we were given a tour of every damn plant imaginable and all the all-natural herbal medicines and remedies that they produce.  They had some fresh cacao powder that smelled like heaven.  I could have done without the education on a black pepper tree and aloe vera plant, but I humored them.  Carly went on a shopping spree at their little store.  She’s a hippy at heart.

Next, we stopped a viewpoint on the outskirts of Nuwara Eliya that looked over the sprawling hill country, numerous waterfalls and a few lakes.  We followed that up with a stop at Ramboda falls – which is like the 11th highest waterfall in Sri Lanka – so not impressive at all.  After that, we swung by the Bluefield tea factory and took a quick tour of the process for making black Ceylon tea. I don’t like tea, so the only fact I retained is that tea pickers are all female and are expect to pick at least 20kg of tea leaves every day.  Definitely not quitting my day job.  These women looked fucking miserable.  And their living conditions are horrid.  Think about that the next time you enjoy your Lipton.

Enjoying the views in Nuwara Eliya 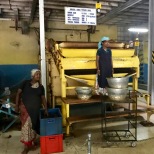 We drove through the town of Nuwara Eliya on our way to our amazing boutique hotel, The Langdale by Amaya.  The Langdale is a beautiful English country-style house set among the rolling hills of Nanu Oya, nestled in lush tea fields.  The service here was phenomenal, especially compared to the cluster fuck of a hotel in Sigiriya with the buffet Nazi general manager.  As soon as we arrived, the typical Sri Lankan afternoon showers set in.  Once the rains cleared we headed out for a hike through the tea fields.  The hotel staff shouted a warning about leeches as we headed out the door.  We made a joke about being from Los Angeles and therefore being skilled at spotting leeches, but generally paid the warning no mind.  Carly decided it would be a great idea to brave the hike in sandals, and was rewarded with three blood sucking leeches that we had to pull off her feet after our hike.

A walk through tea fields at Amaya Langdale

We got in a decent workout by the pool before we cracked a bottle of wine and got ready for dinner.  Long story short, we had the best curry of our lives.  I’m still thinking about it…

Carly and I started the day with a 6 am sunrise hike through the tea fields.  It was blissful until we got lost in the maze of tea plants and dead-ends and found ourselves in a standoff with a deer.  When we finally made it back to the Langdale all the good breakfast tables in the sunroom were taken by the other guests.  Not to be outdone, Carly sweet-talked our creepy waiter from the night before (who gave us free ice cream at dinner and also picked a leech off of Carly’s ankle this morning) into setting up a table outside for us to dine in the sunshine.  We deferred our leave time by few hours to enjoy the beautiful infinity pool in the morning sun.

Breakfast blogging with a view!

Pradeep picked us up and drove us about three hours to the quaint mountain town of Ella, where we had lunch overlooking the main drag sitting on bean bag chairs at Chill Café.  It started to rain and we quickly realized we were in for a relaxing day of not doing shit – so we started drinking.  Pradeep tried to take us on a hike, but we quickly educated him on the fact that LA girls don’t function in the rain. He took us to our bed and breakfast, Country House Ella, where we checked in to our amazing cabin overlooking lush green hills and mountain peaks.  The rain quickly turned into an aggressive torrential downpour with lightening to boot.  We are so fiercely adverse to water falling from the sky that we skipped dinner and went to bed early.  New fad diet for your 2019 resolutions – move to Seattle, stop leaving the house for nourishment any time it rains, get skinny.

We were up around sunrise the next morning, no surprise there given the fact that we have the bedtime of an eight-year old.  We were served an amazing breakfast on our balcony – the only picture I got was after it was half eaten, obviously because of our impromptu fasting the night before.  Pradeep picked us up and we headed out to the famous Nine Arches Bridge to catch the morning train as it arrived in Ella.  We had originally planned on taking the train from Nanu Oya to Ella, but the first and second-class reservable seats sold out a month and a half in advance and there was no fucking way I was riding in steerage where they pack people in like cattle.  Just to be clear, my need to have an assigned seat on a train is not because I’m some prissy bitch.  It’s because I’m an impatient bitch with complete and utter disdain for strangers in my personal space.  A very important distinction.

Back to the bridge.  Nine Arches Bridge is a beautiful colonial-era bridge designed by a Sri Lankan architect and built by locals using only stone bricks and cement, no steel.  Once we got to the bridge, we had about an hour to kill before the train came.  As the its approach grew near, the number of insta-fame thirsty sluts in white lace tops and floppy hats forcing their boyfriends to take hundreds of staged pictures of them “living their best lives” increased exponentially.  And then there is old Rory – with a selfie stick in a nike tank top.  The disparity was palpable. 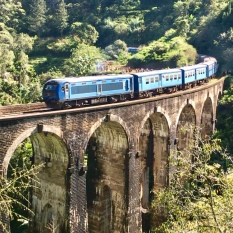 Next on the agenda was a quick hike up to Little Adam’s peak, which provided beautiful views of Ella gap and prominent Ella Rock.  Carly and I considered hiking Ella Rock, but it required waking up at 4 am as well as a considerable amount of coordination and stamina, neither of which I was blessed with.  Plus, it’s basically the same damn view from Little Adam’s Peak for about 4x the work.  I fully maintain that my decision was based on efficient time management and not laziness. 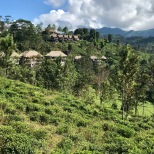 On our way down from Little Adam’s Peak, Carly ran into a girl that she met while we were sailing with Bucketlust in Belize a few years ago.  Literally, ran into an acquaintance from two years ago and halfway across the globe while on the side of a fucking mountain in Sri Lanka. The travel world is shockingly small sometimes. We made plans to meet up later that night for drinks.

Carly and I had about 4 hours to kill before our cooking class, so we set out on an impromptu bar crawl through Ella’s main drag.  Our first bar was a cluster fuck.  After waiting 20 minutes to order a drink and then rescuing said drinks from a waiter-less bar ourselves before the ice melted, we decided not to further test our luck with the Sri Lankan service industry and went back to the Chill Café.

We headed to our cooking class at Ella Spice Garden and met a group of young Aussies and an expat American couple who we would be sharing the class with.  No one stood out as overly obnoxious (other than Carly and I), so I was relieved.  Our teacher was a young Sri Lankan guy named Chandika who drives a nicer car than I do and is low-key funny as hell.  We started with garlic curry.  I am assuming you are thinking that garlic curry entails some sort of garlicky sauce with vegetables or a protein as the main component.  WRONG.  It is literally curried garlic.  160 cloves of garlic for 8 people, to be exact.  We worked in pairs to peel all the garlic and Chandika rated us.  Carly and I won, obviously.  We also made potato curry, dhal curry, and some coconut shit that I didn’t pay attention to because I hate coconut.  We then all sat down to enjoy the fruits of our labor. 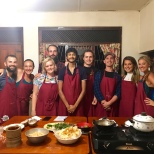 The fruits of or labor

We headed back to Chill Café, for the third time in about 30 hours, and were greeted by our usual waiter who found us some bean bags and remembered I take three limes in my vodka soda.  Carly’s friend met us a bit later for a drink with some of her travel buddies.  Don’t get too excited, we were still home by 11pm. On the walk home Carly and I raved about the cooking class and I started mentally planning a dinner party to introduce all my friends to the amazingness that is garlic curry.  That dinner party has since been cancelled.  Why, you ask? Do you have any idea what happens after you consume 40 cloves of garlic?  Buddha exacts his revenge.  Delhi Belly strikes in Sri Lanka.  I’m not sure how I can make this more clear.  Carly and I had a rough early morning.