Tonight, we’ll ring in 2019 from half a world away and 13.5 hours in advance of our friends and family at home.  There is just something about spending New Year’s abroad that allows me to believe, even if just for a few days until I get home to reality, that the upcoming year is going to be awesome.  It’s probably just the lack of Taco Bell that gives me a false sense of hope in sticking to my new year’s resolutions.  Last year I made it about two weeks into the new year before almost killing myself in the Philippines and spending the first six weeks of 2018 on bedrest, so the ability to walk upright through the month of January will be progress as far as I’m concerned.  Aim high, friends.

The name of the game today is to conserve our energy at all costs until the entire beach in Unawatuna erupts in a giant cluster fuck of fireworks, lights, drinking and dance parties – the main party of which is at our fucking hotel, Kingfisher.  No day drinking and passing out at 8 pm like a fucking degenerate, especially when your balcony overlooks the DJ.  In Sri Lanka, showing up to the party at midnight is considered premature and leaving the party before 5 am is pathetic.  The pressure is on.

We spent the morning leisurely laying on daybeds at our hotel while we watched the staff set up for the big party.  We had a healthy lunch on the main drag in town at Bedspace (awesome restaurant, highly recommend) and killed some time perusing tourist shops and buying nothing.  Our plan was to next head out to a nearby beach for sunset, but we ran into our first snag of the day when trying to find an ATM – we can’t be constrained by silly things like money on a night like New Year’s Eve, after all.  So here’s the rub – all the banks are closed on New Year’s Eve in Sri Lanka, and since the preceding two days were a weekend, the ATM’s in Unawatuna had less cash than a stripper working the lunch shift.  Literally, nada.  We tried four ATMs before the locals informed us that we would need to go to Galle about 20 minutes away, which is the nearest place with actual banks, for any hope of making it rain when the clock strikes midnight.  Ever the adaptable travelers, we headed to Galle and figured we would knock out a quick tour of the fort and town while getting cash and simultaneously fending off premature drunkenness for a few hours longer.  Patience has never been my strong suit.

Galle is an adorable little waterfront city which was first fortified by the Portuguese and then later by the Dutch.  The town has a distinct European feel, with a grid of little streets lined with shops, restaurants and art galleries that can be covered, more or less, in about an hour.  We grabbed a drink and met a nice British family who were staying in Galle for three days and they were bored out of their fucking minds.  The dad actually referred to Galle as “a shit Ibiza”.  Mr. Fancy pants was not pleased.  Staying three days in Galle would be the equivalent of spending three days of your California beach vacation in downtown Pasadena.  A lack of travel research will get you nowhere, people.

We hi-tailed it back to Unawatuna and grabbed a low-key dinner.  We opted out of our hotel’s buffet dinner preceding the party.  Who the hell wants to party in a slutty outfit on a belly full of curry?  I don’t have high hopes in a midnight kiss at this point, but going beast mode on a buffet would certainly dash any lingering optimism.  We ran into a friend of Carly’s from home who now lives in Oz while we were at dinner – small world strikes again.  After dinner, Carly continued to restrict my shots to the face until after 10 pm.  What would I have done without her? Pass out before midnight for sure.

Around 11 pm we decided to head down to the beach and see if the kids had been put to bed.  Remember what I said about beach parties in Sri Lanka prior to midnight?  The anticipation was palpable, but we still had people with canes and children with diapers lingering.  We ran into Carly’s friend from earlier at dinner as well as Fedora hat guy from Mirissa that we met a few days ago while walking down the beach – the backpacker community in Sir Lanka is very small.  And no, he did not heed my warnings and burn that fucking hat.  We walked up and down the beach sizing up which parties had the best DJ’s and the best-looking people.  Rows of fireworks conspicuously lined the shore, waiting for midnight to strike. And the anticipation builds. 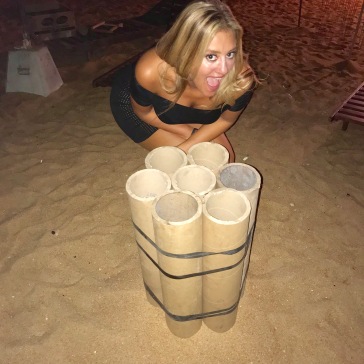 I should not be allowed near fireworks

We headed back to Kingfisher to meet up with our Danish friends from our hotel in Sigiriya just in time for the midnight countdown.   The fireworks were apparently the smoke signal for the real shit show to begin, because that’s where the night takes a left turn in rage town.  With four hot white chicks in tow, our path was clear – head to the VIP section to make some friends with bottle service. As luck (or fate) would have it, we stumbled upon an awesome group of British gays and young Sri Lankan guys.  They were insanely fun shoved booze in our face.  It was clear that we had found our party team for the night.  These guys were a good time.  The details are hazing and unimportant, but rest assured that our motley crew of Danes, Americans, Brits, and Sri Lankans made New Year’s Eve at Unawatuna our bitch.  We obviously didn’t spend a dime of cash we had procured – thanks to our ability to make fabulous VIP friends on the fly – but better to be safe than sorry.  Bedtime finally came calling at 5 am.  For the second time in a week.  I am shooketh. 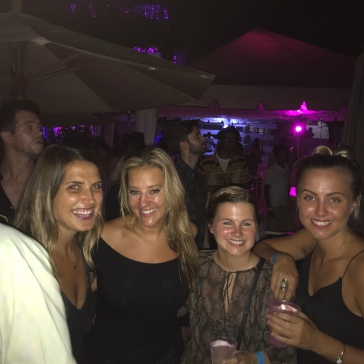 The girls on the dance floor

My party bros for NYE

The girls at the cabana 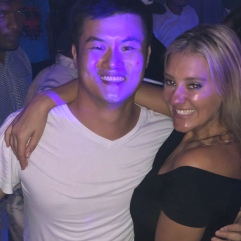 My British BFF for NYE

Today will be a short one because I slept until 3pm when Carly finally dragged me out of bed for a meal.  Her ability to function on a lack of sleep and overuse of alcohol is a gift.  I too possessed this gift once, but you have to give it back when they issue you your Thirty card.  Along with your metabolism and optimism.  I kid, of course, I had never had much of a metabolism.

We ate at a truly shit restaurant on the beach and I was genuinely offended by my meal.  Hopefully this keeps happening and I just stop eating in 2019.  With vodka oozing from my pores, we went on an endless and futile search for a decent bloody mary.  One bartender made a sad attempt that tasted like it was made with dragon fire and morning after vodka-cranberry vomit.  I’m almost certain he pureed actual tomatoes to a pulp and then added vodka and half a bottle of hot sauce, along with whatever condiments were handy.  I awaited septic shock for fear that it had burned a hole through my fucking intestines.  I took the drinks back to the bartender said he said “too spicy?” and I said “too something…”?  After a quick and amiable haggling, I threw him a couple bucks and the search continued.

It should come as a surprised to no one that we ended up on an impromptu New Year’s Day bar crawl.  At bar number three, we had an odd encounter with some old shit faced Sri Lankan men who claimed, in slurred speech, to be gem jewelers and offered to pay for anything we wanted if we would just sit with them.  Carly held out for some colorful rocks but their pockets turned up empty so we politely declined and soldiered on.  It’s going to take a lot of more than a few free glasses of sauv blanc to make me a sugar baby to a Sri Lankan blood gem dealer who can’t hold his fucking liquor.

Our rationale after a few or five drinks was that we should probably go out tonight to the beach party, since we leave the party beach for chill resort-style living tomorrow.  Yes – there is a beach party tonight – there is a beach party every night.  Have you learned nothing from this blog series?  We made the brilliant decision to take a quick nap at 8 pm, using the rationale that we could get in a solid 3 hours of sleep before the pre-party even starts. I’m shaking my head at my stupidity and lack of self-awareness as I write this.  It’s only January 2, so this is for sure the party foul of the year to beat.  Because you know damn well we woke up at 3am, took one look at each other, laughed and went back to bed.