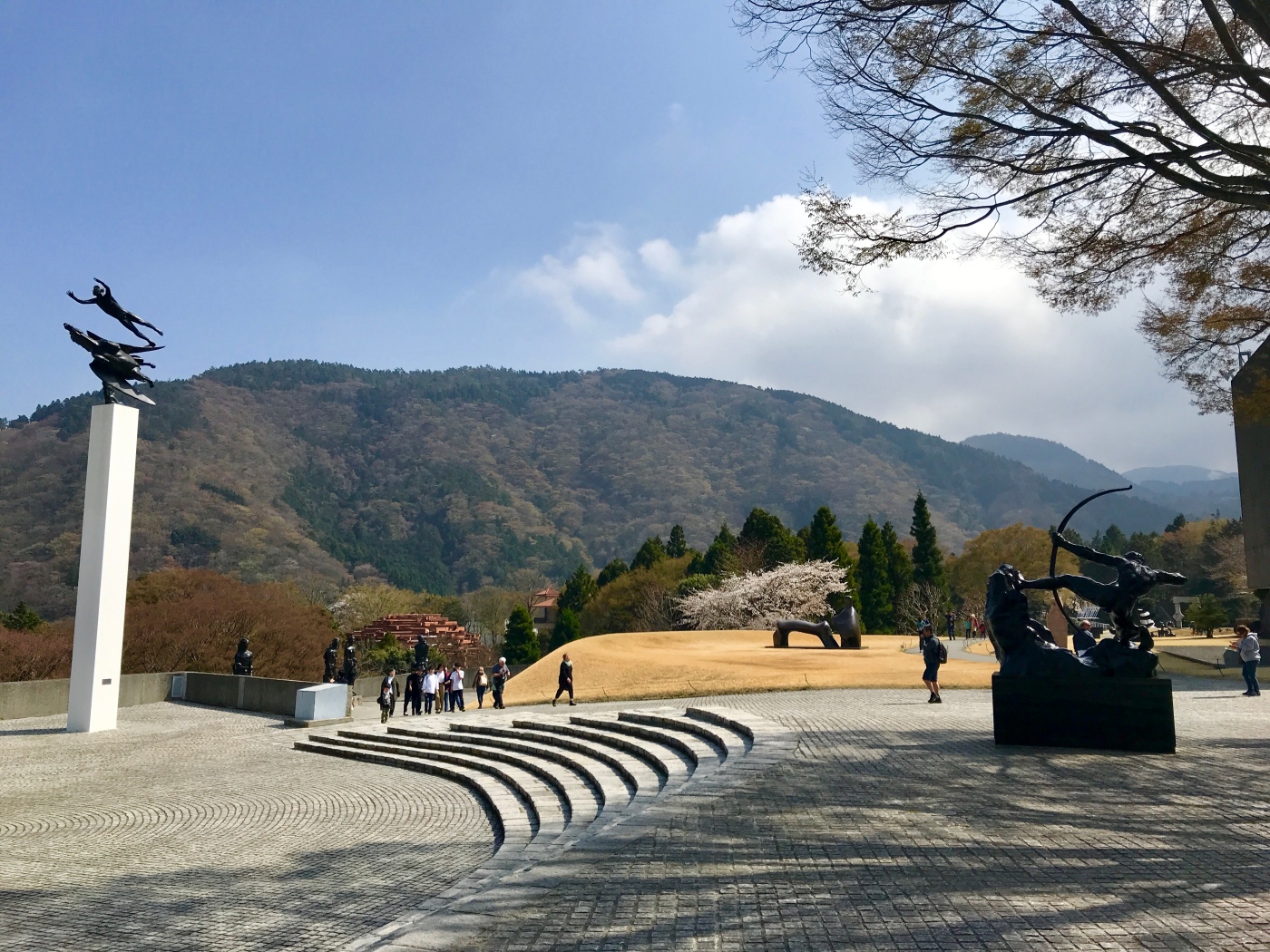 Today we are leaving Kyoto and heading to Hakone in Japan’s Fuji-Hakone-Izu National Park.  Hakone is a mountain town known for its hot springs and views of the elusive Mt. Fuji.  After our aggressive visit to Kyoto we are in desperate need of some relaxation and nature.  I had McDonalds for breakfast at the train station.  Throwing in the towel on Japanese cuisine on day three.  No one is surprised.  I asked Carly and Neil if they wanted champagne for the train ride.  When they answered no I just asked them again.  And again.  Until they realized I would keep asking until their answer was yes.  Soon we were popping champs on the Shinkansen (the Japanese bullet train) bound for Hakone.

I need to digress for a moment to discuss my love of Japanese public transportation.  It doesn’t matter if it’s a bus, a train, or a boat, that shit is always on time.  And it is cut throat – if you show up ten seconds late, you are fucked.  They wait for no one.  What makes Japanese transportation so great is that they understand what most people I know fail to, which is that your time is not more valuable than that of the collective group.  If only I could find a way to teach that to 95% of the self-absorbed ass holes I know.   Yes, you are probably one of them.

We arrived in Hakone at the Odwara station where we purchased the Hakone Free Pass, which gives us unlimited access to all transportation in the area over the next two days.  From Odwara, we took the Hakone Tozan Railway to our hotel in Gora.  The Hakone Tozan Railway is Japan’s oldest mountain railway and winds through the mountains, over bridges, through tunnels and along switchbacks.  It is supposedly quite a treat for train fans, whoever the hell those losers are.  To any normal person, it’s a really fucking slow train.

Once we reached Gora, we dropped our bags at our hotel, and headed out to a burger place that I read about online.  Woody’s is a toy-story themed treehouse-like restaurant with creepy dolls from the movie randomly placed all over staring at you while you eat.  It’s weirdly awesome.  The burgers here are massive an messy.  While I pondered how to best attack my food, Neil stuffed his burger in his face like a lion feasting on his prey.  I have legitimately never seen anyone eat a plate of food more aggressively in my life.  It was a fucking bloodbath.  You would think the guy hadn’t eaten in weeks.  I’m actually shocked he didn’t eat his hand by mistake.  I’ve been known to get pretty disgusting with some Panda Express on a bad hangover day, so if I’m impressed by your ability to utterly demolish a plate of food, that is really saying something.

After lunch we went to the Hakone open air museum, which features an awesome display of modern sculptures spread throughout an open-air garden with 360-degree mountain views of Hakone.  It also features an impressive Picasso collection.  I’m not much of a museum goer, but I was pretty blown away by this place. Did I really just say that a museum blew me away?  So this is what old age feels like. 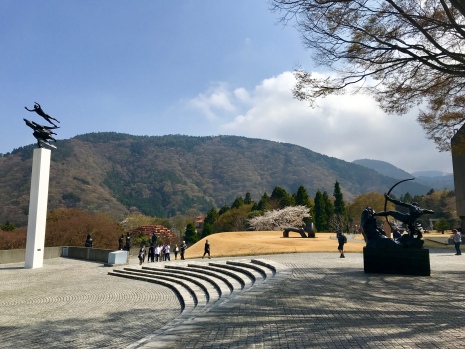 The fat lady has sung

After the museum we walked to the Hakone Kowakien Yunessun, which is a truly bizarre hot springs/water park combo.  This little walk turned out to be more of an uphill hike along a random path through the woods, yet twenty minutes later we found ourselves at the Yunessun.  This place is a fucking trip.  It’s a Japanese hot tub play place, with bizarre themed hot tubs, a water slide into a hot tub, indoor and outdoor hot tubs with waterfalls, and also has a traditional Japanese onsen on the groud floor, which is segregated by men and women.  Typical Japanese onsens have very specific rules about how you must shower before you enter and they don’t allow people with tattoos in.  I have a tattoo on my toe, because I’m hood like that, so this was a good option.  It also allows men and women to enjoy hot tubs together, which is fun when you are traveling in a co-ed band of misfits such as ourselves.  The only real problem was that they didn’t sell wine.  The ladies only naked area was by far the best part, mainly because there were no screaming children.  We tried the pool where the little fish eat the dead skin off your feet.  I was utterly disgusted.  Carly was a good sport, but unfortunately when Neil put his hobbit feet in pool there was no fish for anyone else.  Those fish know a dead skin buffet when they see it.

Neil feet attracting ALL the fish

We headed back to the hotel where we smashed the $10 buffet and were in bed by eight.

Today we are tackling the Hakone tourist trail before heading to Tokyo.  First you take a cable car halfway up a mountain, where you then catch a gondola that guides you into the Owakudani Valley, at which point you continue down the mountain in another gondola to Lake Ashi and board a pirate ship that takes you across the lake.  The highlight of all of this are the stunning views of Mount Fuji – if the weather is clear enough.  When the weather complete and total shit, like it was for us, the trail is really just various forms of incredibly slow transportation while staring out into grey skies. 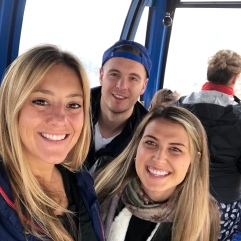 Party on the Hakone cable car

Blending in with the locals in the Owaku-dani volcanic valley 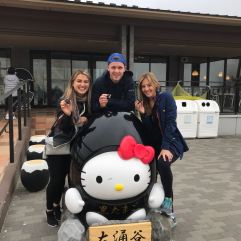 The Hakone Shrine on Lake Ashi

We went through the motions anyway while we were in the area.  We ate the famous Owakudani black volcanic eggs that are boiled in a sulfur spring and are rumored to add seven years to your life.  My drinking has probably taken at least that from me, so this is really just an attempt at breaking even.  At one point we waited in line for ten minutes to get a picture in front of the Hakone shrine.  Japanese people fucking love waiting in lines.  I don’t mean bullshit lines at home where everyone cuts in front of each other, I’m talking orderly and respectful lines for everything from tourist attractions to restaurants.  But not subways. Subways are every man for himself. 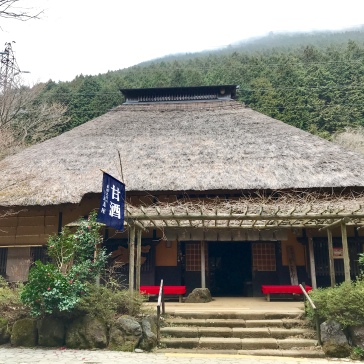 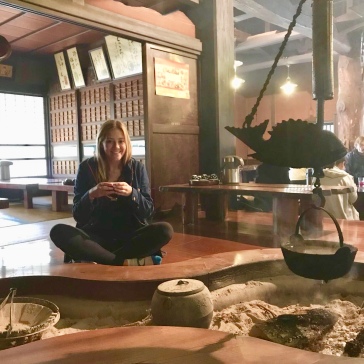 That afternoon we caught the train to Tokyo, checked into our Airbnb and headed out on the town for some dinner.  Tokyo at night is FUCKING AWESOME. The entire city completely lights up to the point of sensory overload and there are never ending masses of people everywhere. People who apparently need to eat.  A lot.  There is literally a restaurant every five feet in this city.  I didn’t even bother looking up at all the shit above the first floor because what is the fucking point?  We wandered around for a while paralyzed with food options until the decision was made for us by a very loud Japanese guy screaming at us to come inside.  The place was packed and had dancing teppanyaki chefs so we took it as sign and obliged.

Teppen Otoko Dojo Shibuya is an izakaya style teppanyaki restaurant.  Translation: bizarrely small plates of food cooked on a griddle in front of you.  Carly ordered a “veggie steak plate” which consisted of one grilled white onion cut in half and three pieces of bamboo shoots no longer than an index finger each.  Cost: $0.10, RRP $9. The plate was, however, decorated with some lovely wicker fencing, the overall mass of which was triple the amount of edible material on the plate.  Who serves someone an entire onion and calls it a meal?  I had a “Japanese pancake” called Okonomiyaki, the contents of which were not discernible to the naked eye.  It looked and tasted like the Chef vomited onto his griddle and then seared it into a congealed mass.  To add insult to injury, he then he covered it with fish flakes.  Barf.  Neil had the steak, which was decent, but the chef’s one-bite taste test while plating accounted for about 25% of the portion.  The entertainment was at least decent.  Another good thing to come out of this meal was discovering our newfound love of shochu, a Japanese vodka-like liquor distilled from rice.  It’s basically sake’s sluttier and more entertaining older sister.  Kyoto was all about the sake, but Tokyo is all about the shochu. 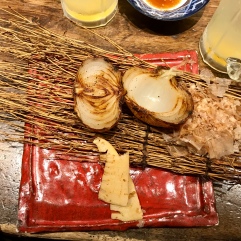 Neil’s meal – with phone for scaling

After dinner we headed back to the Airbnb to get ready for our first night in Tokyo.  To me, that means ripping shots of vodka to the face.  To Carly and Neil that means power napping.  Out of the goodness of my heart I gave them a solid hour of nap time before screaming them into consciousness and pouring booze down their throats.  Neil had a friend in town, so we met his buddy at Hub British Pub down the street.  Yes, I flew to Tokyo to hang out in a chain British pub.  I headed directly to the bar where I discovered an actual line of people waiting patiently in turn to buy drinks.  Remember how I said Japanese people love their lines? Even in bars.  I think we should institute this form of ordering drinks in bars at home.  It gets harder to catch the eye of bartenders with each passing year.  This would really level the playing field for me.

A Japanese girl came up to me very excitedly and started repeating a Japanese phrase over and over while giggling a lot.  Her boyfriend translated for me.  “Big boobs”.  My c-cups apparently make me the Tits Mcgee of Japan.  I’m not mad about it.  While I was being fondled by little Japanese girls we made friends with Paul, a guy from San Francisco who lives in Tokyo, and his Aussie friend Alex.  Paul offered to be our tour guide tomorrow so these boys will be making another appearance.  We hopped the around the bar, doing laps and talking to strangers.  I made bar bffs with a guy who grew up down the street from me in Torrance, CA.  There is no smaller world than a bar full of white people in a foreign country.  Once Alex began to girl Carly a creepy palm reading we decided it was time to bounce.   I’d say the first eight hours in Tokyo was a success.

One thought on “A train ride through Japan’s tourist trail”