Good news my friends, its another BOAT DAY. We were up bright and early to knock out breakfast and pack a dry bag full of booze. Sound familiar? A morning banca boat excursion is ideal for calmer waters and less crowds at the snorkel sites, so we caught a tricycle to town around 7:30 am. Having walked around town the night before, I had inquired into the prices for a private boat, so I knew the general ballpark of where negotiations should begin and end. Boats are pretty cheap here in Alona Beach, but they also charge extra per person to snorkel with the turtles, so factor that in if you every make your way to Panglao. Although, to be clear, we are talking about a general spread of $5 USD on pretty much everything so it’s all Monopoly money. We hopped off the trike and the first guy that approached me agreed to the price I wanted, so he was our lucky winner. I asked him to point out his boat to make sure it wasn’t a piece of shit. When he pointed to a boat named “Holy Infant” I instantly knew it was a winner.  An entire day of drunkenly riding the Holy Infant with a stop at Virgin Island?  That blog practically writes itself.  Within about five minutes we were boarding the Holy Infant with Jessie and his little buddy who’s name I can’t remember because he didn’t speak.  First stop – sea turtles! 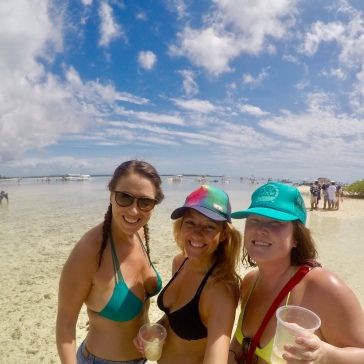 It was low tide, so we had to walk out to the boat through some sea grass, which is known to sometimes have sea urchin lurking in it. Of course my shitty target sandals choose this very instant to break. The walk that ensued was very slow, unsteady and nerve wracking. Pretty sure that’s the only way to approach a Holy Infant anyway. Once aboard we realized we forgot to rent some snorkel gear, but Jessie insisted we could get some once we reached Balicasag island. So off we went on the Holy Infant with our God fearing seaman. I made that up on the boat and thought it was hilarious that I managed to include god and seaman in the same sentence. The girls were not nearly as amused. Tough crowd. We embarked on our journey thinking that we were pretty fucking special for getting to ride on the Holy Infant, until we passed a banca boat named Holy Infant 2. Upon arrival at Balicasag island, we noticed about five other boats named Holy Infant or Holy Infant 2. It was disappointing to say the least. The majority of Filipinos are Catholics, so I would think they could at least spread the wealth of boat names among all those saints.  Feeling rather basic at this point, we popped a bottle of champagne to lift our spirits for a little pre-snorkeling warm up.

We got to Balicasag island and Jessie called over a man in a canoe to rent us some snorkel gear and take us to see the turtles. The price we were given here was higher than the price we were told back in Alona Beach, so I got pissed and an argument ensued.  Sure, we’re only talking about a couple of bucks, but I do not take kindly to people trying to fuck with me and my money just because I’m a white girl and a tourist.  The snorkel man was also supposed to be our guide for snorkeling with the sea turtles, but at that point I decided I just didn’t like his fucking face – it was dishonest – and we told him to kick rocks and asked Jessie to get us a different guide. Guide #2 was a young, innocent looking boy who didn’t piss me off, so he was the lucky winner. We got into his little canoe and took it to shore to get into a slightly larger canoe (which I’m pretty sure was the ass hole’s canoe), which we then took over to the snorkel site. Someone told us it was our guide’s birthday.  I’m pretty sure they tell every boat that to get a better tip.  Chill out bro, I’m from the US, I’m good for a decent tip if nothing else.  If you are wondering why moving to canoe was necessary, as I was, it is apparently because you need a special permit to be in the area with the turtles and only the dive boats have them. Basically, it’s just a way to get more money out of tourists, but that’s the game so we played along.

Right on his tail! 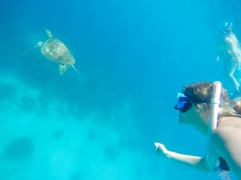 So close, yet so far

I’m coming for ya! 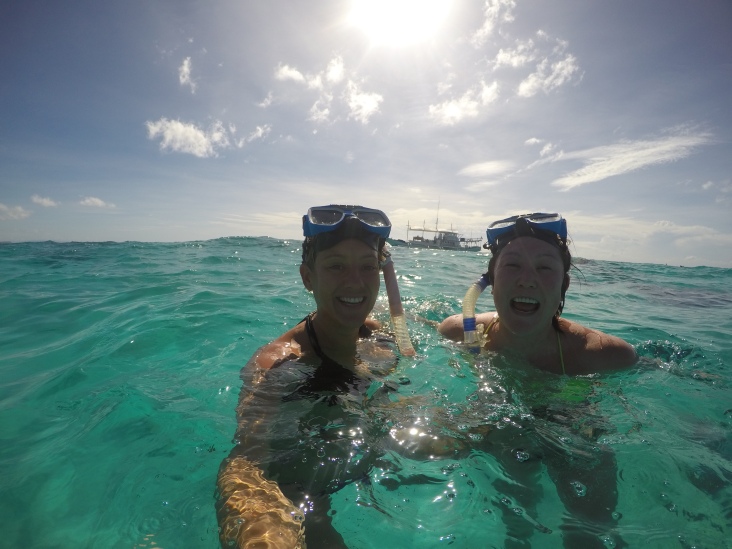 Let me preface this next part by informing you that I fucking love turtles.  I think you have to be a sociopath not to.  I also grew up with a bad ass desert tortoise name Mr. T who is a straight fucking gangster.  He punks dogs and bites people’s toes.  As we we were paddling along our guide yelled “turtle!” and pointed to the water, so Kristie and I quickly threw ourselves overboard and the hunt began. Mar was having some snorkel difficulties, so she joined a little later. The next half an hour or so consisted of us running down turles as fast as possible until our guide yelled at us to stop from swimming too far out into the area where small sharks like to hang out. We saw about ten turtles in total, and I managed to get selfies with two of them.  At one point I was almost close enough to reach out and touch one.  I did not – because I wouldn’t appreciate weird creatures who think I’m cute randomly touching me as I swim either.  It was definitely the highlight of my trip thus far. Satisfied with our hunting skills, we returned to our big boat and made our way to the next stop – Virgin Island.

But where are the virgins?

The sand bar of Virgin Island 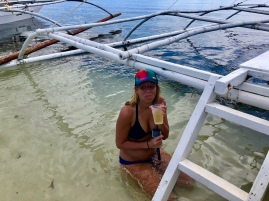 I may or may not be peeing… 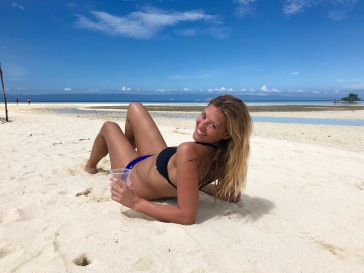 A drink with a view

Another island, another bottle of champagne. We pulled up to Virgin Island, which boats a beautiful, white sprawling sand bar with a few makeshift bamboo shacks selling coconuts, fried bananas, fresh sea creatures and, most importantly, beer. There was a big sign that said “Virgin Island”. We proceeded to desecrate it with inappropriate pictures. A Filipino guy asked to take a picture with us. I told him it would be 100 pesos per girl and he actually started to get his money out. Apparently non-virgins can demand a high price here on Virgin Island. I obviously did not take his money ($2 USD for my dignity – methinks not) but we obliged with a pic anyway. We bought some beers for our crew and noticed an instant improvement in their demeanor. While blasting our music  an impromptu dance party ensued on our boat. Even the guy who doesn’t talk busted out some sweet moves.  The Filipino captains and crews of the other boats gave us thumbs up and made heart shapes at us with their hands. Let it be known that Rory, Kristie and Mar-Mar were the undisputed fun queens of Virgin Island. 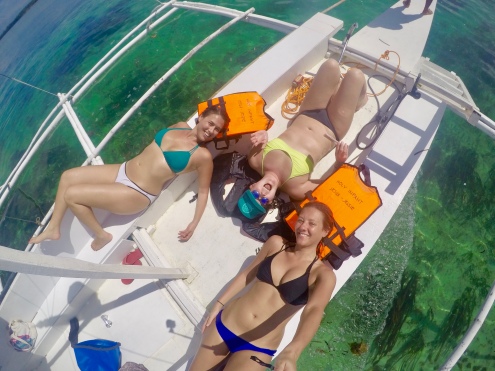 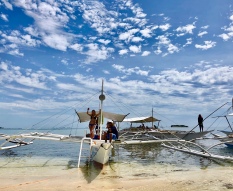 Back at Alona Beach, we had a late lunch at a Greek cafe called “Heros” which was out of water, but luckily not out of beer. Kristie and I took shots of vodka from a water bottle that, ya know, we just happened to have with us. One can never be sure when the need for an impromptu swig of vodka will strike. Back at our resort, we all scattered into various stages of swimming in the pool and napping. Mar and Kristie went to get massages before dinner. We ate another mediocre meal. We have accepted that good food in the Philippines is just hard to come by.  Thats ok, we didn’t come for the food. After dinner I sat outside creeping on a wedding and blogging while listening to speeches. The maid of honor’s was a fucking train wreck. It was her sister. That’s the problem with having to make your sister the maid of honor, isn’t it? Nine times out of ten, you have friends that are far more entertaining than your sister. Luckily I have two brothers who are funny as fuck and no sisters that can subject me to the indentured servitude know as being the maid of honor.

Tomorrow Marissa and I decide to put together our own little DIY tour and turns out to be Something Different, if you know what I mean. Kim Ortloff – I know I’ve at least piqued your excitement.