It’s 3 am in the Dubai airport. The girls and I are staring down the barrel of six more hours here in duty-free hell. In the middle of the night. We have taken refuge at the Shake Shack in the hopes of waiting this out. At least we are well fed, for now. Save yourselves!

Today we were up early for a little morning sail. The resort has a big wooden boat that they line with bean bag chairs to sail guests around every morning and in the evenings at sunset. We boarded the boat and headed straight to the front. The sail was pretty boring. I almost fell back asleep. But it was nice to get out on the water for an hour. Let the record show that we made a solid attempt to do something other than lounge around on our rafts and read books while blasting country music into the Indian Ocean. It’s just not for us.

Morning sail in the Maldives

This morning’s breakfast buffet featured the best food selection yet. It really made me wonder how I’ve managed to get through thirty two years without breakfast falafel. Couple update: the honeymooners seemed to be in good spirits today. There was no sign of resting bitch face, which no doubt lightened the buffet mood. Nothing notable to report from breakfast other than the usual over-eating and smuggling out contraband sandwiches for lunch.

We decided to mix things up and hit the main resort pool today. It’s a pretty rad infinity pool on the beach that looks like it spills out into the ocean. Or at least it would be rad if it wasn’t infested with the scourge of the earth that makes up a majority of our pool companions. On our boat cruise this morning we spent the better part of the hour trying to avoid and ignore an obnoxious Asian family, however they seem to have taken a liking to us and have followed us to the pool. You know the family I’m talking about – every resort has them – the woman screams commands at her family at the top of her lungs as if she owns the fucking place while the husband runs around with a DSLR snapping four thousand pictures of his motley crew from every possible angle, paying no attention to who he steps on in the process, all the while their child wreaks havoc on the vacation of every adult within a mile radius by being an ill-mannered little shit head. At one point this little inbred ass clown of a child dumped an entire bucket of pool water on Jorgie’s head while she was floating in the pool. Did his parents whip his ass? Or at the very least scold him? Fuck no. Mom and Dad were too busy screaming their buck teeth at each other from across the pool, no doubt arguing about the lighting requirements for Mom’s next headshot. 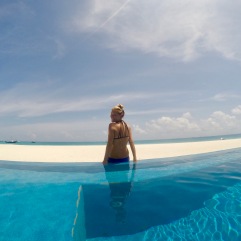 Three Amigos at the pool

As we were lounging in a corner of the pool on our rafts trying to stay as far away from the Joy Luck Club as possible, a European couple comes over to Steph and tell hers that they want her spot in the pool. The other 95% of the pool is completely empty, yet for some reason they must go out of their way to demand the specific three square feet of the pool that Steph is currently occupying. She was obviously bemused and so she floated a few feet away in earnest anticipation of discovering the reasoning for this odd behavior. The boyfriend then proceeds to take pictures of his girlfriend deep-throating the straw of her frozen margarita in that exact spot. I guess you can’t give a seductive duck-face from just anywhere in the pool. Has no one taught any of these people proper communal pool etiquette? When I was a kid I would have gotten my ass kicked for splashing in the general direction of an adult. I’d like to say I was shocked by the lack of respect for the personal space of others, but this shit seems to be the new normal these days. Looks like I need to add a pool and beach etiquette seminar to my “How not to be a moron” curriculum. After a few hours we had our fill of fraternizing with the common folk and so we headed back the safety of our over water compound. If today proved one thing, it’s that our money was very well spent on the bungalow with a private pool. Resort pools are for peasants.

The afternoon passed much like the days prior. Reading, floating, lounging. We hit the gym in the late afternoon and then showered and cracked a bottle of wine while we watched Kardashian re-runs on E! before dinner. Tonight we headed back to the Teppanyaki restaurant, mainly because we have cycled through all the restaurants on the island and we thought it would be awkward to have the resort set up a romantic beach dinner for two…for three. We walked on to the Teppanyaki bungalow and immediately notice the Joy Fuck Club at one of the cooking stations. Their little rugrat was already banging his utensils on the table screaming for fried rice like a fucking lost boy. We made a hard left turn for the other station and settled in across from an attractive Indian couple who ate their lobster in quiet. The girl looked like she was about sixteen, but at least her parents taught her some manners before they sold her off to a rich guy. And he takes her the Maldives – so shit, can someone arrange one of those marriages for me, please? 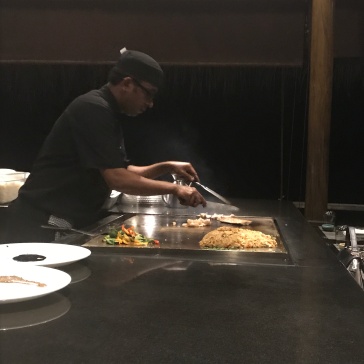 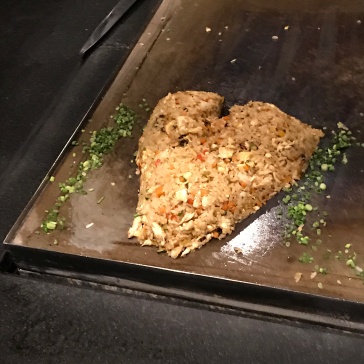 After dinner the resort set up a movie on the beach under the stars, with bean bag chairs set in the sand around a giant projector screen. Steph and I had both recently seen the movie they played, so we only stayed long enough for me to kill a few bowls of popcorn and enjoy the general ambiance. A few couples were waiting for spots to sit so gave up our seats and headed back to our room for bed. They look like they need the entertainment more than us anyway.

The girls at movie night

Today is our last day in the Maldives. It’s the usual – early wake-up time and hit the gym, followed by our last buffet breakfast. I think ten in a row is more all-you-can-eat before 10 am than anyone needs. We enjoyed our last few hours in of private pool time before we had to check out and have all our shit moved to one of the day use rooms until our boat back to the airport later tonight. We had no choice but to brave the shared resort pool,once again.

We threw down our beach bags on some pool chairs and looked up to see none other than Resting Bitch Face herself glaring at us from beneath her oversized designer sunglasses. Someone please order this girl one of those frozen margaritas with an extra wide straw so she chills the fuck out a little. Apparently she hates pools as much as she hates breakfast, sunshine, happiness, and her husband. Where is that annoying little Asian kid with his bucket of water when you need him to splash the bitchy scowl off someone’s face?

Steph and I immediately hopped in the pool on our rafts, kindles in hand, ready to put a dent in some reading material. Just as we had gotten comfortable a resort employee comes over to inform us that there are no rafts allowed in the pool. The pool that we spent hours on our rafts in yesterday. When I inquired as to why, he claimed it was because they take up too much space and the pool is not big enough. I gestured around the pool with my head to draw attention to the fact that we were the only fucking people in the giant pool. The employee reutted by informing us that only children can have small floats in the pool. Another day at the communal pool, another bewildering encounter. Not in the mood to fight on my last day of vacation, I took my raft and headed out the ocean where I was swept half way to a neighboring island in the current and almost run over by novices kayakers who didn’t know their oars from their ass holes before having to swim back to shore, raft in tow. All the while, the pool remained relatively empty. So just to recap: Obnoxious children throwing water on people – allowed, harassing fellow resort patrons to move – allowed, subjecting everyone at the pool to your resting bitch face – allowed, grown women minding their own business reading a book on raft – NOT allowed. And the universe makes sense once again.

Our plan for the late afternoon was to do the free snorkel tour. However we walked down the dock only to be informed that the snorkel tour is not actually a boating adventure, but is instead just guided snorkeling from the reef right off the beach of our resort. The one we snorkeled in ourselves the other day. Furthermore, the Joy Luck Club was also signed up for the snorkeling excursion. We promptly returned our snorkel gear to the dive center and called it a day. I don’t want to be anywhere near that annoying little Asian boy if he drowns because this blog alone would be enough to prove motive.

We went to an early dinner and then watched the Kardashians 10th anniversary special in our loaner room before it was time to leave for the airport. I know it sounds like we watch a lot of Kardashians, but E! is pretty much the only American channel we get here and they play Kardashian reruns around the clock. On second thought, fuck it, I don’t need to justify my love of awful reality tv to you people. I watch those sluts on the regular, even when I’m home, and I like it.

Our return transfer yacht back to the airport was huge and beautiful and I wanted to stay on it and sail around the Maldives for another week, but sadly the real world was calling. Listen to the fresh hell that we must endure to get home: three hour flight from Male to Dubai, seven hour layover in the Dubai airport from 2 am to 9 am, sixteen hour flight from Dubai to LAX. Our seven hour layover was originally two hours, but Emirates canceled their second daily flight between Dubai and LA when all Trump’s travel bans went into effect earlier this year. Since no one can get into our country, they don’t have the demand to fill two flights a day, resulting in our original flight home being cancelled. I realize that in the grand scheme of Trump atrocities this is very small potatoes, but if you can’t bitch about a layover in your own blog while you are cranky at 5 am in an airport, what is the point of writing one?

I’m writing to most of you from the future. It’s now 5 am in the Dubai Airport. The call to prayer has woken up all the napping tourists. I am happy because now everyone is awake and miserable just like me. Miserly loves company. Four more hours until our sixteen hour flight home. I’ve forgotten what sleep feels like. If you don’t hear from me, send a search party to the booze section of the duty free shop in Emirates Terminal A.

One thought on “Proper Pool Etiquette: 101”