Today I let the girls sleep in to the leisurely hour of 8am. It was the least I could do given our trashy night out in Banff at the Dancing Sasquatch. I woke up hoping it was a dream, but no amount of fireball shots will ever erase the vision of that man oh the dance floor in the jean vest being air-spanked by his friend from my mind. Who are we kidding, I’ve see far worse. We awoke to find Suz with an ankle swollen to the size of a tennis ball. Apparently she rolled it on the walk back to our hotel last night while laughing uncontrollably about the train wreck of people up in da club. In her defense, it’s hard to concentrate on where you are walking after you’ve just shared a dance floor with Canadian equivalent of the People of Walmart. In case you are keeping track, this is the third sprained ankle of the trip. I think we can all agree that hiking boots would be a solid investment. Luckily for her, Troop 638 has an in-house physical therapist.

Linds iced and wrapped Suz’s ankle while Stina, Mar and I went down to the hotel breakfast. In Chili’s. Yes, you read that right. Our hotel has a Chili’s in the fucking lobby. A legit “I want my baby back, baby back, baby back” Chili’s. And the hotel continental breakfast is served in the Chili’s. It’s exactly as ghetto fabulous as it sounds. We have a grotto hot tub and easy access to boneless buffalo wings. The raving tripadvisor review practically writes itself. Eat your heart out, Fairmont Banff Springs hotel patrons.

Suz picked the perfect day for a limp, since we had no aggressive activities planned. When it comes to girl scouting, we are far more Troop Beverly Hills than Red Feathers. We have definitely earned a break. And yes, I purposefully planned chill day with the expectation that we would get completely shit faced while enjoying the stellar Banff nightlife. I was half right. We took the Banff public bus up to the Gondola station. Bus passes were included with our hotel and it even picks up right outside Chateau Chili’s. The gondola was actually one of the highlights of the trip. The views from the top were amazing. Made even more amazing by the fact that we brought a few bottles of champagne up to the top to have a drink with our view. We claimed a little viewing platform all to ourselves and popped bottles at the summit of Sulphur Mountain. Some rambunctious chipmunks joined in the fun and one particularly rowdy little guy, we’ll call him Alvin, spilled my cup of champagne. I proceeded to scold him aggressively, calling him a “bad boy” and telling his friend “don’t cover for him, he knows what he did”. To Alvin’s credit, he zambonied the shit out of that spilled champagne. You have to respect a chipmunk that abides by international drinking rules.

Alvin, you zamboning son of a bitch

Troop 638 at the top of Sulphur Mountain

Suzanne’s long lost family of oblivious Asian tourists invaded our little slice of mountain heaven. We were out of booze anyway, so rather than fight a losing battle against the unyielding power of their selfies sticks, we made our way back down the gondola. We had a bit of a wait for the public bus, but instead stumbled upon a random empty tour bus with a jolly Canadian driver that welcomed us on and told us he would drop us anywhere we wanted to go. Canadian twelves strike again. We hopped off on the main drag in town and wondered through the tacky souvenir shops that line the street. We got Beaver tail – which is basically a flat Canadian churro that can be topped with anything your heart desires. Canadians do not fuck around when it comes to toppings. They will put gravy on their fries and a hot fudge sundae on a damn churro pancake. In addition to touristy chachki shops full of shit that no one needs, Banff has an abundance of chocolate shops. It was at this point that we discovered a Banff attraction you won’t find in any guide books. The Hot Chocolate Twins. Just to be clear, they are hot twins who make chocolate. They are actually just brothers (we asked) and only one is hot (sucks for the other guy), but Hot Chocolate Twins sounds better than “attractive man and his similar looking yet less attractive brother who smell like fudge”. What on earth could be better than a hot guy who lives in the mountains and makes chocolate? Oh right, one who makes money. But if last night taught us anything, it’s that beggars can’t be choosers in Banff. Don’t worry, we’ll stalk them…I mean see them…again later in the trip. I’m going to wait until tomorrow’s blog to tell you what kind of accent they had – although those of you who know me can probably guess correctly based on my enthusiasm.

We had lunch at the rooftop patio of the Rose and Crown. I almost ordered a “Caesar”, which is the Canadian version of a Bloody Mary, until I was informed it was made with Clamato juice…and was then informed that Clamato juice contains clam broth. What the actual fuck? Someone please explain to me the chain of of events that led to someone deciding to add clam broth to a fucking alcoholic beverage. Did the Little Mermaid have a hangover that day? When in doubt, bottle of Rose for the table. After lunch we were drunk, so we took a nap until it was time for dinner. That’s the basic agenda for today – eat, drink, sleep, repeat.

We spent the evening at the Fairmont Banff Springs, which is the sister hotel to the Fairmont Lake Louise. I know what you are all thinking: why on earth would we chose to dine in a world-class 5 star hotel on the banks of a river in the beautiful Bow Valley when we could get some fajitas and skillet queso right in our own hotel lobby? We arrived in style out the rear doors of the public bus and our jaws immediately dropped as we gazed upon the hotel, which looked more like a castle fit for a Disney princess.  Just to be clear, we are not the princess in this scenario.  We are the wicked witches who wreak havoc on the castle and eat all their food.  The beauty of being too cheap to stay in five star hotel is that you can afford to eat two dinners in one night at one.

The view from the pool of the Fairmont Banff Springs

The Queen has come to claim her castle. 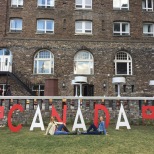 Fun with signs at the Fairmont Banff Springs

Our first stop was Grapes wine bar, for some vino and charcuterie. We went outside our comfort zone and started with a bottle of rose. This wine bar is known for amazing and decadent cheese and charcuterie boards, crafted by the chef who stands directly behind the bar. Our board was a work of art that lasted about ten minutes until we devoured it. Don’t worry, we took a page out of our Asian tourist friends’ book and took a picture of it for you first. Our waiter was an adorable gay Canadian boy who hated everything about his work uniform other than the fact that it was a women’s medium. He also informed us that he has only actually eaten the amazing food at the wine bar once, because only the managers get a discount. We suggested he just scavenge leftover food off people’s plates, but apparently he has a rule that he only eats off plates of people who he would make out with. It may sounds like a good rule, but you haven’t have that blue cheese and house made mustard. After another bottle of wine it was time to move on to part two of our Fairmont progressive dinner. We snooped hard on a fancy wedding going on in a room next to the wine bar. The ambiance and decor was beautiful, the wedding guests, not so much. It looked like the B-team table exploded into an entire eighty person wedding. What a waste. Let the record show that if someone ever actually marries me and my Dad springs for a wedding at the Fairmont (he won’t), I would fully expect my guests to come correct, looking good enough to earn their seats. We contemplated crashing, but we would stick out like sore thumbs. Not because we were in jeans, but because we are fucking Canadian twelves.

The Troop tackles the boot!

Our wine and charcuterie board at the Grapes wine bar

The Waldhaus pub at the Fairmont is an adorable Bavarian-style cottage that sits at the base of the Bow river, a short hike down from the hotel. Our waiter from the Fairmont in Lake Louise, Trevor, told us we had to stop by and at least get a giant boot of beer. So we ordered Das Boot, which was about two liters of beer, and entertained the other patrons of the patio as we played the boot game – you pass the boot around the table chugging it until someone finishes, at which point the person before that looses. And the beer can’t touch the table. Stina won, and I lost. Mainly because there was no punishment for losing, so who gives a shit. We tried to order fondue, but apparently serving a flaming pot of cheese to a group of Californian fat asses poses too great of a risk to the Canadian National Parks. Fire bans are no fun. Instead, we took this opportunity to try our first poutine of the trip! Cheese fries covered in gravy that serve as indisputable proof that some food does actually taste better than being skinny feels. As if that wasn’t enough, we also split schnitzel and french onion soup. After dinner, we we deep in wine/beer/food commas and headed back to the hotel. In bed before 10 pm, because Canadian twelves need their beauty sleep after all.

4 thoughts on “The Wicked Witches of the Fairmont Banff Springs”