Today Carly and I were up bright and early for our 6am shuttle to the Pacaya volcano. Guatemala has the art of tourist transportation down to a fucking science. They pack you onto a shuttle completely full of other tourists going to the same destination, keeping the price of a ride about $7-$30 anywhere in Guatemala, depending on your destination. When I say completely full, I mean every single seat. All the shuttle drivers must sit in some back room each night playing the numbers to ensure no seat goes unoccupied, because you will never see a shuttle that is not full. Couple that with the fact that the majority of tourists here are backpackers who, and I’m generalizing here, don’t believe in showers or deodorant, it’s essentially a game of Russian roulette with your senses. But alas, it’s cheap and easy, and that’s how it’s done. It’s also on time. These shuttle drivers don’t fuck around on timing. Smelly but prompt, so we’ll call it even. Our shuttle to the volcano was only an hour long, but the only seats left when we got on were the ones up front with the driver or in the back next to a dude in a knit beanie. We chose wrong. Never trust the hygiene of a man in a beanie when it’s over 70 degrees. If he’s trying to hide unwashed hair, odds are he’s hiding unwashed other things.

We were the first group of tourists to arrive at the volcano, thanks to our speedy shuttle driver. To give you some background, there are three volcanos that you can climb from Antigua. One takes about 8 hours, one takes two days and requires overnight camping, and the third is a quick 2-3 hour round trip. I’ll give you one guess which one we chose. Let me remind you that my optimal time limit for any activity involving soberness and physical exertion is two hours. So little Pacaya volcano it is. We were assigned an adorable Guatemalan man as our tour guide who proclaimed our group name “Champions”. Thankfully all the champions were young and fit pretty much kicked that hike’s ass. I read online that it’s straight up and straight down, but the aggressive incline portion didn’t last long. And if I say a hike isn’t bad, you can take that shit to the bank. Y’all know this blog would be a bitch-fest if I was not appropriately warned about a hike. I was definitely judging the people under the age of 50 who opted to pay for a horse to carry them up the volcano. If you want to sit on your ass, don’t sign up the for the volcano hike tour. Am I right? We somehow got lucky and did the hike on one of the few days with a completely clear view. We snapped some horrid selfies and then hiked down to a black lava field and roasted marshmallows in the heat from little cracks in the hardened lava. We charged back down the volcano and were back in Antigua by noon.

View of a volcano from a volcano

The view from the top 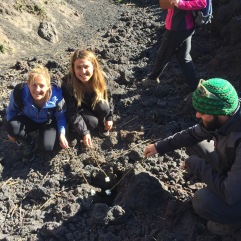 Roasting some mallows in a lava field

Once showered, Carly and I hit the streets of Antigua in search of lunch and a celebratory Rose for the old gal. We happened upon a cute little tapas bar and decided to take a gamble. The Rose resembled a weak pinot noir, but you gotta take what you can get. The food was awful. After a glass we decided another little hike sounded like a grand idea so we hoofed it up to “Cerro de la Cruz”, which is a giant cross on top of a hill that overlooked the city. We only got lost twice trying to find it. We headed back to the hotel where we chilled on the rooftop until dinner. Yes, there might have been some trampolining involved. Who can resist a trampoline with a view of centuries old ruins? After our unsuccessful lunch we put some research in before dinner and headed to “Rainbow Cafe”, where we were rewarded with awesome salads (read: copious amounts of avocado) and amazing falafel. In bed by 9pm again, just because we can.

Today we are off to Lake Atitlan. Google that shit and prepare yourself for the jealousy. Carly and I headed to the town square in Antigua for a quick 7am breakfast at a cafe before our 8am shuttle to the lake. To no one’s surprise, we hopped from hostel to hotel until every single seat was filled. During our three hour trip we made friends with our shuttle mates. When I say “we”, mean Carly engaged everyone in endless small talk while I watched shows on my ipad and lent and occasional “oh, wow!” or “cool!” to the conversation. I rarely travel with someone who talks more than me, so I’m taking advantage. At one point the Policia pulled over our shuttle and a heated discussion ensued between the Guatemalan fuzz and our driver. After about ten minutes he came back to the car and we continued on with no explanation. The entire shuttle was confused but grateful to not have gotten robbed, so we just kept it moving. One girl on our shuttle was headed to the same hotel as us to work and teach yoga in exchange for room and board for six weeks. Small world. We shall refer to her as “Yoga Whitney” from here on out.

We arrived in Panajanchel, the main town on the lake with road access, and the boat drivers descended on our shuttle like a cloud of locust offering us rides to various towns around the Lake. I quickly haggled the price for the three of us to our hotel’s dock. I went easy on the negotiations, since it is Christmas Eve after all. Also, the total cost is about $2, so sometimes it’s just more economical to be the agreeable white girl instead of the aggressive one. Lake Atitlan is a huge, gorgeous lake surrounded by volcanos with small Mayan towns built into the nooks and crannies of the mountains. All you have to do is flag down one of the small public shuttle boats from whatever dock you are on, tell El Capitan where you want to go, and agree on a price. That is the main method of transportation from town to town, and the only method for some towns that are not accessible by road. We arrived at our hotel, La Isla Verde in the tiny town of Santa Cruz, about ten minutes later.

Our hotel from the water

The hotel is beautiful. It’s an oasis of calming trellises, areas to lounge, a huge dock to sunbath on and an awesome organic restaurant that cranks out insanely good food. This is home for the next three days. Merry Christmas to us. They showed us to our cabin, which is a three story trek up into the mountain, with an amazing view overlooking the lake. No complaints here, as this ass needs all the help it can get, so three days of stairs will do me good. Did I mention the outdoor shower? If I’ve said it once, I’ve said it a thousand times, life is just better with an outdoor shower. Carly and I spent the rest of the day sun bathing on the dock, trying to get our base tan game on point for the Bucketlust next week. Since my post break-up diet has consisted of Taco Bell and self-pity, I need all the tan I can get before a week in a bathing suit. Oddly enough, my hangover diet is exactly the same. Not to worry my friends, I always rally for a boat party. 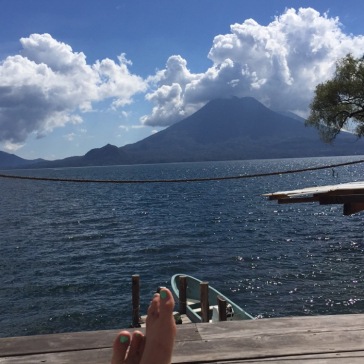 Chillin on the deck

Around 3:30pm each day we lose the sun behind our mountain. Our plan was to do some yoga while at the lake in an attempt to relax and cleanse our souls before a week of complete debauchery that no amount of shame can survive. But no yoga is scheduled over the next few days, despite the fact that we arrived with the yoga teacher. Go figure. So we did a quick workout by the dock while the other hotel patrons looked on in horror. I don’t blame them. But a last ditch effort is better than no effort at all.  Before dinner I found a candle and did a quick Hannuakah prayer for night one.  No, it didn’t burn all night, but  I’m probably the only Jew in Guatemala so I did my best to represent.

Getting my Jew on

Dinner tonight was a special four course Christmas meal that took about two hours. Which was great, because we have absolutely nothing better to do than eat and drink red wine all night. It’s amazing what you can rationalize with a thirty minute workout and the phrase “treat yo self”. We headed to bed around 10pm, escorted up to our room by the adorable hotel dog who proceeded to sleep outside our door in an attempt to get one of us to cuddle. It took all the strength I could muster to not let him in. I am not up to speed on his flea and tick regime and not a gambling woman. About an hour later a creature decided to enter our open air bathroom and make quite the stir. I flipped my shit and Carly and I went to bed with full bladders, afraid to open the bathroom door. The hotel staff would inform us in the morning that it was probably just a possum. Although slightly concerned about the gross level of indifference shown towards disgusting rodents, I’m trying to go with the flow. Around midnight, the Christmas fireworks started. It was like sleeping in a fucking bomb shelter. And once again, Xanax saves the night.