Today Steph and I woke up with the sun around 6am. It’s amazing what you can accomplish in a day when you go to bed at 8:30pm the night before. We have a lot of ground to cover so lets get started. We started off with a morning run on our beach while the sun came up, then a little workout on our deck. I’m obviously just patting myself on the back for working out day two of vacation, because I know you all don’t care. We then headed down to south beach to the backpackers for breakfast. It’s cheaper and there are no children, but it’s also a backpackers, so the surroundings leave a bit to be desired. You can’t always have it all. While we were waiting for our food, which was on Fiji time, I headed over to one of the watersport huts to look into tours. I had been stalking this place yesterday, but there was never anyone working there. So naturally I showed up at 8am when they were supposed to open today. And then again at 8:30am when they actually opened. This whole Fiji time thing is obviously going to take me a few days to get used to. For some reason we were feeling extra fancy today and decided to go with the most expensive tour we could get our hands on…the three hour jet ski tour. We booked the afternoon tour leaving at 1pm, so we still had a morning to kill. We took that opportunity to head to the pool and meet a few of our fellow resort guests. Okay, we didn’t actually talk to anyone so much as we just people watched and exercised swift and decisive judgements on everyone we saw:

First up are the lesbians. The hot lesbians. Like, really hot. Their existence is incredibly annoying because now that there are a pair of girls who actually make out with each other at the pool, Steph and I can no longer play the fake lesbian card to get free shit. They are totally cramping our style. Everyone knows there is only room for one set of lesbians at each resort. And they really go for it. They rub each other down, bob there heads up and down suggestively between each others legs in the pool, the whole nine. These are not shy lesbians. Every man at that adult’s pool was staring at them out of the corner of the eye hoping their wives wouldn’t notice. There aren’t sunglasses dark enough to hide that stare, boys. To add insult to injury, they are natural blondes. Now Steph and I are just the two friends who aren’t as hot as the lesbains and have brunette roots. But we do have something that they lesbians don’t – a mother fucking villa on the beach. A villa that we platonically share a king bed in because we were mistaken for Mr. & Mrs. Rory Boston when I made our reservation. Take that, hot lesbians!

There is an Aussie couple we checked in with who I’m pretty sure vacations here solely for the cheap day care. I’ve seen them around about four times now, yet I have not once seen the children that they checked in with. Well done, mates. But my award for most entertaining guests has to go to the Asian honeymooners who came to Fiji and took an “Introduction to snorkeling” class. Steph and I witnessed this shocking display of naiveté with our own eyes as we waited for our jet ski tour. Let me paint this picture for you. A young man and woman in full wet suits despite the 85 degree weather, holding hands as they slowly and shakily walk out into the water following their Fijian guide, like newborn deer out for their first stroll through the woods with mom. They are then instructed on how to put on a snorkeling mask. I’m not really sure what else an intro to snorkeling class entails after that – perhaps 10 minutes on how open your eyes, and another 10 of breathing exercises, followed by a detailed explanation of how to kick your feet? I’m also not entirely sure the couple knew how to swim before signing up for this high level nautical adventure of putting their faces in three foot deep water. I could have made more progress than these morons in my own bathtub.

Luckily for us, no one else signed up for our tour, so we ended up with a private three hour jet ski tour around the Mamanuca islands. If that ain’t fancy, I don’t know what is. It was like being upgraded all over again. Our guide showed up with the jet skis about 20 minutes late (fiji time), which he brought from a neighboring island. We asked him his name, and after a slight hesitation he said “Tom”. I think it’s pretty obvious that he just picks random white names on every tour so that the tourists don’t butcher his real Fijian name. Fair. We started off with Steph in the driver’s seat, because I hate driving. I much prefer to sit in the back and take pictures with my go pro. At this point, I came to a few interesting realizations: (1) while I’ve been on quite a few jet skis in my day, I’ve never actually driven one, and (2) I have never been on a jet ski sober. Ever. Typically when I ride jet skis I’m shit faced and I flag down random guys to give me a ride. Like I did in Miami. It’s one of my party tricks. So we are entering double virgin territory with this tour.

Steph on the Jet Ski 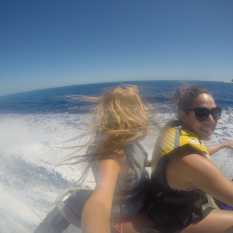 Off and running with Steph in the driver’s seat

I’ve done a lot of fun tours in my life. I’ve swam in the Amazon river with pink dolphins, snowmobiled on a glacier in Iceland, ridden a camel to a Bedouin camp in the Sahara desert, canyonned through glow worm caves in New Zealand, just to name a few (if that seemed like travel bragging, it’s because it was). I do have a point. This jet ski tour was one of the most fun and memorable tours I have ever done in my life. The second we took off, I immediately knew this was some of the best money I had ever spent. Our first stop was Modriki island, where Tom Hanks filmed the movie “Castaway”. This is not to be mistaken with Castaway Island, which is nearby, but not where the move was filmed. [Side note: CBS just filed Survivor on the island we are staying on earlier this year. The crew stayed at our resort while filming.] We flew past one beautiful island after the next, all with beautiful hidden beaches and lush forests of palm trees. We pulled up to Modriki on our jet skis, jumped in to the crystal blue water and beached ourselves on the island. A photo shoot obviously ensued. 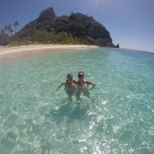 Fiji Tom is also a photog 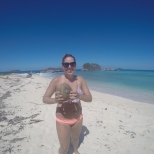 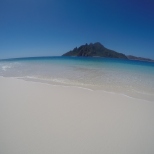 On our way to our next stop, I decide I would give this whole driving thing a try. If I’m being totally honest, I was not a fan. My fists were clenched around the handle bars so tight that my hands started cramping. My legs were clenched tighter than a schoolgirl in a brothel. I got better and more comfortable after a while, but I would still just prefer to sit in the back enjoying the scenery while someone drives me around. It’s funny, because in life my personality is very much that of a “driver”, yet when it comes to all modes of transportation, I very much prefer to be a passenger. I have no desire to sail a boat, I just want to drink drink beers while sunbathing on the top deck. I don’t want to learn to fly a plane, I just want to pop bottles of champagne in my private jet. And I certainly would prefer a beer bong on a party bus to absolutely any other form of road transportation that you can think of. I do enough metaphoric driving in my life. So just let me be the kid in the back seat and enjoy my jet ski tour. Luckily Steph loves driving, so that’s exactly what she did.

Steph in the backseat

Very serious on the jet ski

We passed by a few more islands. At one point we drove by a resort and both exclaimed to each other how nice it looked. Took us a full thirty seconds before we realized it was our own damn resort, and we were driving right by our villa. We headed out to a sandbar – little mound of sand sitting in the middle of the ocean. Completely empty, except for Steph and I. We grabbed our snorkels, jumped off the jet ski and swam up. Another photo shoot ensued for your viewing pleasure. I love using this blog to justify my vanity. We enjoyed our little slice of uninhabited heaven for a while until a boat of tourists packed in like sardines showed up. We left and let the sheep have the run of the sandbar, lest we actually rub elbows with those less fancy than ourselves. Snobby, I know. But Fiji has spoiled us. 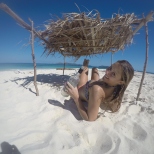 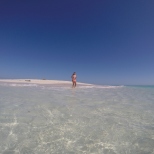 How cool is this?

After the sand bar, it was donut time on the jet ski. I felt like the Duke’s of Hazzard’s super fucking classy sisters. You never heard about them because they married rich and moved out of Hazzard. Then came to Fiji. On a few occasions our guide would look back at us and then slow down, to ask if we were ok. It took a while before I realized that every time I started taking jet ski selfies he thought I was flagging him down for help. He thought we were absurd.

We made it back to the resort and bid adieu to “Fiji Tom”. We immediately hit the bar – not for a drink – for ice. Happy Hour at the Villa, baby! Our villas has two bartenders who serve one thing – vodka sodas. And they serve it with a heavy hand. Toasting to a successful day #2, Steph and I downed vodka sodas on our deck as the sun set. And then we drank some in the dark. And then we were drunk. Drunkety drunk drunk. A “whoops, we probably shouldn’t have skipped lunch” kind of drunk. There is only one way to top off a fabulous, fancy day, and that is with a fabulous fancy dinner. We made reservations for the fancy restaurant that night and stumbled in with a bottle of duty-free wine in hand. The food was mediocre, but there is just something about eating filet mignon after a jet ski tour that makes you feel like you are kicking life’s ass. After dinner we were pretty much shit faced. Neither of us actually remember going to bed. But we did, around 9pm. Getting drunk while the sun is out and going to bed at a reasonable time is what vacation is all about.

Tomorrow we take a boat to a floating bar. There is a strong possibility I will get drunk and try to buy it. The entire floating bar.

One thought on “We Fancy in Fiji”