Happy Valentines Day! Let’s be honest, I could barely type that just now without a snarl on my bitchy resting face. Screw Valentines Day. I started this fake holiday off in the same way I prefer to start most of my Sundays – with champagne. Mar and I polished off two bottles while I did some blogging and she did…whatever it is that girls do in the mornings that takes so long. I still haven’t quite figured that out. And I even lived in a sorority house. We had reservations at Duke’s for brunch, so we invited A&B to meet us there for a little Valentines Day drinking.

We figured the restaurant was a short stroll down the beach so we started walking. We soon found ourselves in the path of a hottie with a body playing football on the beach. I told Mar – look at the abs on that guy! At this exact moment, the hottie came running up to us to say hi as if we were all best friends. It took us a second to place him – well, he had to remind us of who he was – it was the waiter that cut us off at the restaurant yesterday after the snorkel tour! I had not realized he was so hot in my drunken state, probably because he had his shirt on yesterday.  We gave him a little shit, his buddy informed us that we were the talk of the restaurant, and with that, all was forgiven.  He then informed us that Duke’s was too far to walk and we would need a taxi. Mar and I wandered up to the front of the hotel trying to get one of the four ubers on all of Maui to come drive us three miles. A lovely couple in their twilight years pulled up in a yellow convertible. Much to my embarrassment, Marissa asked them to give us a ride, and after a short deliberation they agreed. So we hopped in the back of someone’s grandparent’s convertible and headed off to brunch. When they dropped us off, the woman asked us to take a picture with her husband so they could tell their grandkids that grandpa picked up two hot chicks in Hawaii. All in a day’s work.

During a boozy brunch at Duke’s, Mar and I made the executive decision to change our flights and stay an extra day. Aren’t all good decisions made while drinking? We have our entire lives to go back to work. When magic happens in Hawaii, you roll with it. We then all went back to A&B’s place where we played beer pong and formulated a plan to get to the infamous Sunday Beach Party at Little Beach. What are a couple of tourists to do when they are drunk and want to attend a beach party an hour away? Call King Henry of Lahaina, of course! You’ll all remember King Henry from Friday night when we did shots with him and he offered to drive us to the beach party. And I said something about how there is no way we would actually take him up on it. Fast forward two days and many drinks and we are telling him we have three chicks and a gay guy and would love a ride to the party. We didn’t actually have a gay guy, however straight men are far more obliging when there is no one to tilt the odds of getting laid against them. Simple math and little white lies. King Henry came through and picked us up in his pickup. I made screwdrivers in water bottles and we made the journey down to the beach local-style, in the bed of the truck.

Heading out to Little Beach 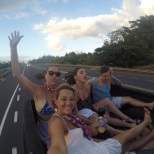 Party in the truck bed!

We got to the beach just as the sun was setting. As we hiked over the hill to Little Beach, a magical scene was revealed. Nudists and clothed alike, frolicking together in perfect drunken harmony on a beautiful beach. It reminded me of Woodstock: the Beach Remix. Not that I attended Woodstock, but I think you get my drift. We met some of King Henry’s friends….and their nipples. Lots of nipples. Did I mention Little Beach is a nude beach? All these nipples seemed to be attached to girls from Minnesota or Maine, or some other wretched place where you can’t rage on a beach in the middle of February. Well done for you, ladies. But let the record show my tan was still better than theirs. We met a lovely man who was pleasuring people with his flute. No, really – he was playing a flute naked, standing in the water. See what I did there? Mar and I obviously had a photo shoot with him. Pictures included, but if you are at work you might need to scroll through them quickly. And just when you think this beach party can’t get any better, the sun goes down and everyone makes a big circle as fire dancers perform. It was epic. It was really fucking beautiful. And it totally trumped your Valentines Day. No seriously, it did. I don’t even need to know what your’s consisted of to make that statement. Thank you to King Henry of Lahaina for, as he puts it, “spreading the Aloha”. 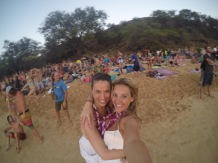 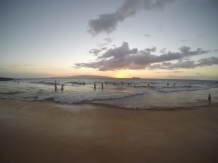 The Kind and I

A&B at the fire show

When it was time to leave the beach, everyone gets in a big drunk line to file out, as you have to hike back down and around some fairly treacherous rocks. Or at least it seemed very treacherous in the dark while drunk with one shoe. Did I mention I lost a flip flop? King Henry was ever the gentleman as he assisted us down the rocky trail in the dark. We all piled into the bed of his truck and sprawled out to watch the stars as we drove back to Lahaina. King Henry dropped us off at a bar, so naturally I went in with one shoe. No one even batted an eyelash. Because, Hawaii. At this point the fearsome foursome decided that we had already won Valentines Day, so why not put the icing on the cake and spend the rest of it in a hot tub? We called and uber and headed back just in time to get thirty minutes in the hot tub before Marriott security kindly asked us to get the fuck out. A&B headed back to their hotel and Mar and I went to bed. If this is Aloha, I could use a lot more of it in my life.

One thought on “Spreading the Aloha on Valentines Day”