The Legend woke us up at 7am to get back on the boat.  Luckily I passed out at 9pm the night before, so I was feeling refreshed and ready to tackle the last day of yacht week.  We had a long sail from Koh Phi Phi back to Phuket – about 6 hours long.  I spent about half that time laying below deck watching Breaking Bad while most of the crew lounged on the net.  Kim, however, got drunk.   Wait, no, that isn’t a fair statement.  Kim got shit faced.  You’ll see shortly why getting shit faced on the last day of Yacht Week is a brilliant maneuver.  We had a few final crew swims along the way, trying to get it all out of our systems before throwing in the towel.  At one stop the Legend pulled us all behind the boat on a rope.  Why is this worth noting, you ask?  Because we tried this same little trick on our first Yacht Week five long years ago with good old “Zoran the Moran” as our skipper and he almost fucking killed us.  I’m talking serious rope burn, near-decapitation shit.  I wish I could bring the Legend home with me and just have him drive me around in my everyday life.  And find me hot boys.  Mark my words, if I win the lottery, that boy is going on my payroll faster than you can say “mega millions”.  I’ll probably put Carly on my payroll too – I can’t be expected to pour my own vodka shots when I’m a millionaire, after all.  And Brandon will get paid to speak in a fake German accent at all times.  Fuck it, fake entourage jobs for the whole crew! 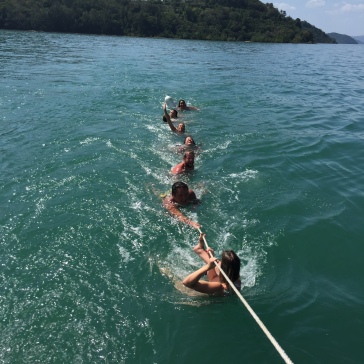 We pulled into the Phuket marina and the giant cluster fuck that is the last day of yacht week began.  Yacht Week check-out is similar to being repeatedly punched in the face over and over again for about 5 hours straight.  I would rather blindfolded myself in a Muay Thai boxing ring while confused ladyboys attacked me with blunt instruments than do a yacht week check-out.  I know, it doesn’t sound that hard.  Don’t you just pack up your shit, do an inspection, get your deposit back and bounce?  Well this is Yacht Week – and they literally specializes in taking simple situations and providing incorrect and misguided information that leaves everyone more baffled than a rat in a maze.   These people would send you on an Easter egg hunt on Christmas morning if they could.  Nothing makes sense.  Best to just start asking questions of anyone you can find that does not have a YW shirt on.   So we pulled in, gassed up the boat and began the check out process.  The first point of confusion: if you want to check out Saturday you couldn’t sleep on the boat that night.  Second point of confusion:  all bags must me packed and off the boat before you can even begin to check out.  So the afternoon was a mess of cleaning the boat, packing up all our shit, and trying to book some hotels on the other side of the island near the beach party that night.  Unless you are drunk-as-fuck Kim.  Who is passed out for about 80% of this and therefore gets out of doing anything.  That, my friends, is the work of a Yacht Week Pro.  I’m totally stealing that move next time.

Just when we thought we were all checked out, the Legend and I had to sit in the charter office for two hours and wait for the ass hole who owned the charter company to stop groping girls in bikinis and come give us our deposits back.  It was almost worth it though, just to see some American dip shit get into a full on screaming match with the owner over a deposit dispute.  I think I found this so funny because the person yelling about the deposit is usually me.   Because my moron skipper or dumb shit crew fucked something up and I don’t want to pay for it.  This year, I had a seasoned crew and a Legend skipper, just a fucked up boat.   So we got our deposit back, I refused pay for the fuel to make up for our boat problems (calmly), and I was told that I would have to discuss a partial reimbursement for our fucked up boat with Yacht Week (not holding my breath).  All in all, a successful check out.  Mainly because I didn’t come off looking like a psychotic bitch.  Yes, I fooled them all for one more day!

After the longest boat check out in life, we made our way to our hotel.  We got 4 rooms this time…we fancy.  Tonight was the actual white party.  Remember the fake NYE white party where everyone got the white memo but us?  Well the joke is on those theme-disrespecting ass holes, because our white shit is clean.  Well, clean-ish.  Nothing coming off of a week on a boat can actually be described as “clean”.  Including most people’s STD test results.  I kid!  Not really.  Carly, my little vodka fairy, hiked to the store and got the good stuff while I showered, to reward my check out efforts.  I’ll give you one guess what we did with it.  That’s right, one last night of WARM VODKA TO THE FACE.  I know it’s sick, but now that I’m back at home, all I can think about is how I want a shot of vodka.  On a Thursday night.  While watching the Real Housewives.  Alone.  In my bathrobe.  I have problems.  But I digress.  We had a little pre-game in the trio’s room before the party and then headed out to the white party.  By “we” I mean everyone but Kim.  Because that drunk ass hole was too tired to go out.  You know, from all her hard work during check out.  Brandon didn’t have any white, but luckily the hotel had white robes.  Yes, he wore a robe to the party.  He looked like Hugh Hefner trying to dress up as Jesus.  Anyone that knows Brandon would not be surprised about this.  Anyone who doesn’t needs to get on his level. 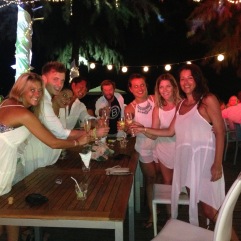 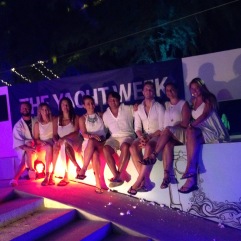 Crew at the White Party

We arrived at the white party and most of the boats were having dinner.  We didn’t have dinner at the club because when the Yacht Week delegated pageboy came to our boat to tell us about the party she said “it’s too bad they are all booked up for dinner already, the food is sooooo good”.  The Yacht Week translation of what she told us is “Hey, come to this really cool party, but don’t eat anything, because I gave all the tables away to the boats who’s skippers I’ve fucked”.  Luckily for her we’ve had seven days of training for not eating, so joke’s on you!  We got to the party and found a table (I guess they weren’t fully booked after all) and I immediately ordered two bottles of champagne.  I went an entire week on a boat without popping one god damn bottle of champagne.  My inner P. Diddy was bursting at the seams.  Sometimes all it takes it a little “pop” to get things going, ya know?  We all made dramatic drunk toasts in which we told each other that we are the best crew in the world, how much we love each other, and how awesome we are.  Because we are.  We are so fucking awesome it hurts.  We did some dancing and took some shots and tried to get people turnt up.  Kevin, my old skipper who you may remember from my description in an earlier post, showed up to say hi, because apparently he lives in Thailand now.  I gave a fake smile and kept it moving.  Once you have a skipper like The Legend, you can’t be bothered with yesterday’s inferior skipper news.  Out with the old, in with new and improved!  Sadly, nothing too exciting happened.  I obviously took another swing at hot Aussie skipper.  After talking to me for about five minutes, hot Aussie told me that he had to go “wash his face”.  Oh right, that makes total sense, because I take care of all my person hygiene in the middle of beach parties too.  Now I’m no stranger to rejection, but at least have the heart to come up with something believable.  I would have preferred “I’m going to go join the circus”, or “I better go, Scotty is about to beam me up” to washing your fucking face.  Come on!  He’s lucky his dirty face is so damn pretty, because that is the kind of bull shit that gets you bitch slapped.  Pretty sure he didn’t even walk away in the direction of the bathroom.  OUCH.  Swing and a miss!  That’s like strike #5.  Woof.  Don’t you just hate that feeling that you have unfinished business?  It’s going to drive me nuts.  I’ll have to find a hot Aussie to replace him.  Maybe the Legend can mail one to me?  Like a mail-order bride, minus the nuptials, exploitation and desperation.   Okay wait, keep the desperation.

And so this is it.  The end of another yacht week.  At the time, I couldn’t get off that damn  boat fast enough.  But now that I’m back at home, I can feel the post Yacht Week depression setting in.   Are there any Yacht Week ass holes reading this who have the inside track on this Brazil route I keep hearing about?  If so, please hit the “contact” button.  Because this bitch needs a boat ASAP.   A boat driven by The Legend while Carly and Nicole pour vodka down my throat and the Lesbians whip out their tits as we sail through some islands in South America.  Who the fuck doesn’t want to read that blog?  Because I sure as hell want to write it.

I just got a hold of some of the crew’s pics, so I’ll leave you with a little gallery for your viewing pleasure.  I officially sucked at picture taking on this trip…will work on it next time. 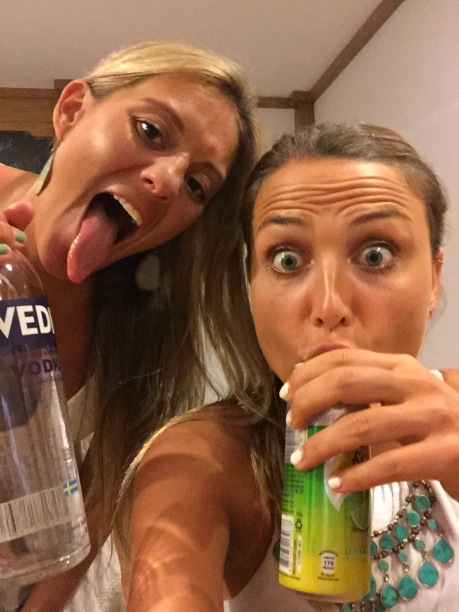 Vodka to the Face!

Kim in her element 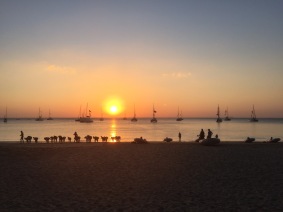 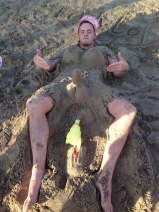 Our skipper the ladyboy