Today we woke up in Khao Sok and went canoeing, which basically consisted of lounging in a kayak like a fat ass while a Thai dude paddles you down the river and points out monkeys and snakes. A poor man’s Pocahontas, if you will. We came upon a family of Monkeys as we were kayaking along with an adorable baby. As we approach, daddy monkey decided to show us who is boss and began humping poor, unassuming mom. She didn’t seem to mind. I got the sense that happens a lot.

After our little canoe trip we hopped in our private van transfer to Patong. And this is where shit gets weird. Patong is basically Thailand’s version of Tijuana and Vegas mixed together to form a hedonistic town of boozing, whoring, and gambling. Hide yo kids, hide yo wife. I have’t decided if that makes it awesome or absolutely disgusting. We drove around in circles for about 45 minutes while our lost driver tried to find our hotel, at which point we said fuck it and got out and walked the two blocks that were left. Kim and I were instantly overwhelmed and in need of a drink by the cluster fuck chaos of Patong. We checked in and high tailed it down to the main drag for to drink our anxieties away. We drank our little hearts out. I immediately started hitting the buckets. You could get a bucket of vodka w/ a mixer for 169 THB, which is about $4.50. So keep ’em coming. While our anxiety was to blame for our early start, our plans for later that night fueled our boozing persistence. That’s right, ladies and gentleman, we were going to one of the famous Ping Pong Pussy shows!! The things I do for you all in the name of journalism!

We met a nice Aussie couple at the bar who decided to join us for the evening. These poor fools did not know what they were in for. About and hour later, Carly and Nicole showed up to rescue me from fifth wheeling. Don’t worry – I’m used to being an odd number wheel. Mainly because no one ever gives the single girl a fucking plus one for weddings. Not that I could find a date anyway. But I digress. Shortly thereafter Mattison and Nakita arrive from LA. So we are now rolling 9 deep down Bangla Road with buckets in hand, in search of a ping pong tout willing to make the best deal. Let’s back up and first give you all some background. The ping pong pussy show is basically a show that is put on in a Thai strip club where the women perform unspeakable acts with their vaginas while tourists look on in fear, shock and awe. Sounds gross, right? It is. But it’s also fucking awesome. The way it works is that you get entrance to the strip club for free and just have to buy your drinks during the show. Because they know you’ll need a a damn IV of straight vodka to get through it. In true Rory fashion, I haggled with the men outside for the price of our drinks during the show. I figured if there is anyone who is used to cheap fuckers who don’t want to pay full price, it’s strippers and their pimps. And then, magic happened….

Now, I know I said the acts they perform are unspeakable, but I’m obviously going to speak about them for you. I highly suggest you sit down to read this. And maybe grab a beer. Or a barf bag. But whatever you do, keep reading. Let’s see how many different ways I can think of to say “vagina”.
1. They ease you into it. Act 1 just comes on stage and pulls some ribbon out of her hoo-ha. A lot of ribbon. Like enough to hang yourself with, which is probably what these women should be doing given their chosen profession. They even let volunteers pull some out. Thank god I’m not very charitable.
2. After more ladies pull a few more long strands of harmless material out of their baby makers, as well as a few ping pong balls, they are finally warmed up. Bring on the cigarettes. Giant cigarettes. They look more like firecrackers. And sure enough, one of our talented labia ladysmiths smokes a few. WITH HER VAJAY JAY. Literally, inhaling and exhaling. Blows smoke everywhere. Can vaginas get emphysema? The inside of that lady’s poon is definitely lined with tar.
3. And then, its time for cake! Don’t worry, I didn’t actually put anything from this establishment in my mouth. But Brandon did get on stage where they lay him down and put a birthday cake on his stomach, complete with candles. Then what I can only assume to be the birthday girl comes around with a long tube in her see-you-next-tuesday and blows them out. No mouth required.
4. Then they brought out the big cunts. I mean guns. This narsty beezy literally pulled a string of fucking razor blades out of her dump truck. And just to be sure there was no funny business, she took a straw and sliced it up for us so we knew they were the real deal. Her tag team whore then pulled out a string of needles. How do you even learn how to do something like that? What is the training, getting fingered by Edward Sissorhands?
5. Oh dear, I hate to inform you that we haven’t even gotten to the weird part yet. I know, its tough, but stick with me. What could they possibly pull out of their sideways vaginas next? Well I’ll give you a hint…they were breathing.
a. Turtles. Little baby turtles. One hoodrat walked on stage with a sly smile like she was hiding something. Then she popped a squat over a glass of water and out popped two baby turles from her cooter. Someone please call PETA, because it gets worse.
b. A hamster. I about shit myself when this one one popped out of her dirty dick box. I literally ran to the other side of the room screaming. I just….I can’t. Let’s move on.
c. A fucking bird flies out of her twat. I would rather be caught in a swarm of locust then stuck in that woman’s ping pong receptacle.
6. I saved the best for last. All hail the Pussy Sniper. First they hand out a bunch of balloons, which you hold over your head. Then, the Pussy Sniper comes along with a loaded dart shooter in her slit and pops the balloons with darts that she shoots of out her black hole. She got every single one. Too bad pussy sniping isn’t an olympic event. It’s probably best these women don’t have dreams anyway.

I counted 14 words for vagina. Oh, and did I mention we were in the front row?  Sorry – no pics allowed at the show.  Trust me, it’s for the best.

After the show a stripper with braces came on the stage. I think we can all agree that braces on adults is never acceptable. If your parents didn’t have the heart to fix your teeth, you unfortunately need to just develop an unhealthy habit of blaming them for your shitty lot in life and move the fuck on. No one takes you seriously with that metal in your mouth. Sorry. So we moved on to one of the million bars down the street where we made the mistake of ringing the bell. When you ring the bell it means you have to pay 1000 THB and you get 30 shots of sugary shit. The good news is that translates into about $30. And I’ve spent $30 on far less. The bad news is you have to take the hangover inducing shots from hell. I’ve enjoyed shots with roofies more than these. We proceeded to dance the night away. Carly danced on a few bars. Kim made silly faces and bowed out early. I proceeded to sweat my ass off and repel every man I came into contact with. You’re typical drunken night in Thailand. And then I got a giant shwarma on my way home and drunkenly watched breaking bad in bed. I’ll obviously have to re-watch that episode. 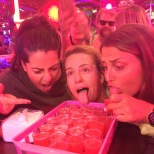 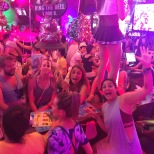 Dancing in one of the crazy bars 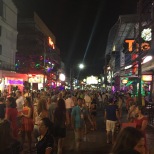 The shit show that is bangla road