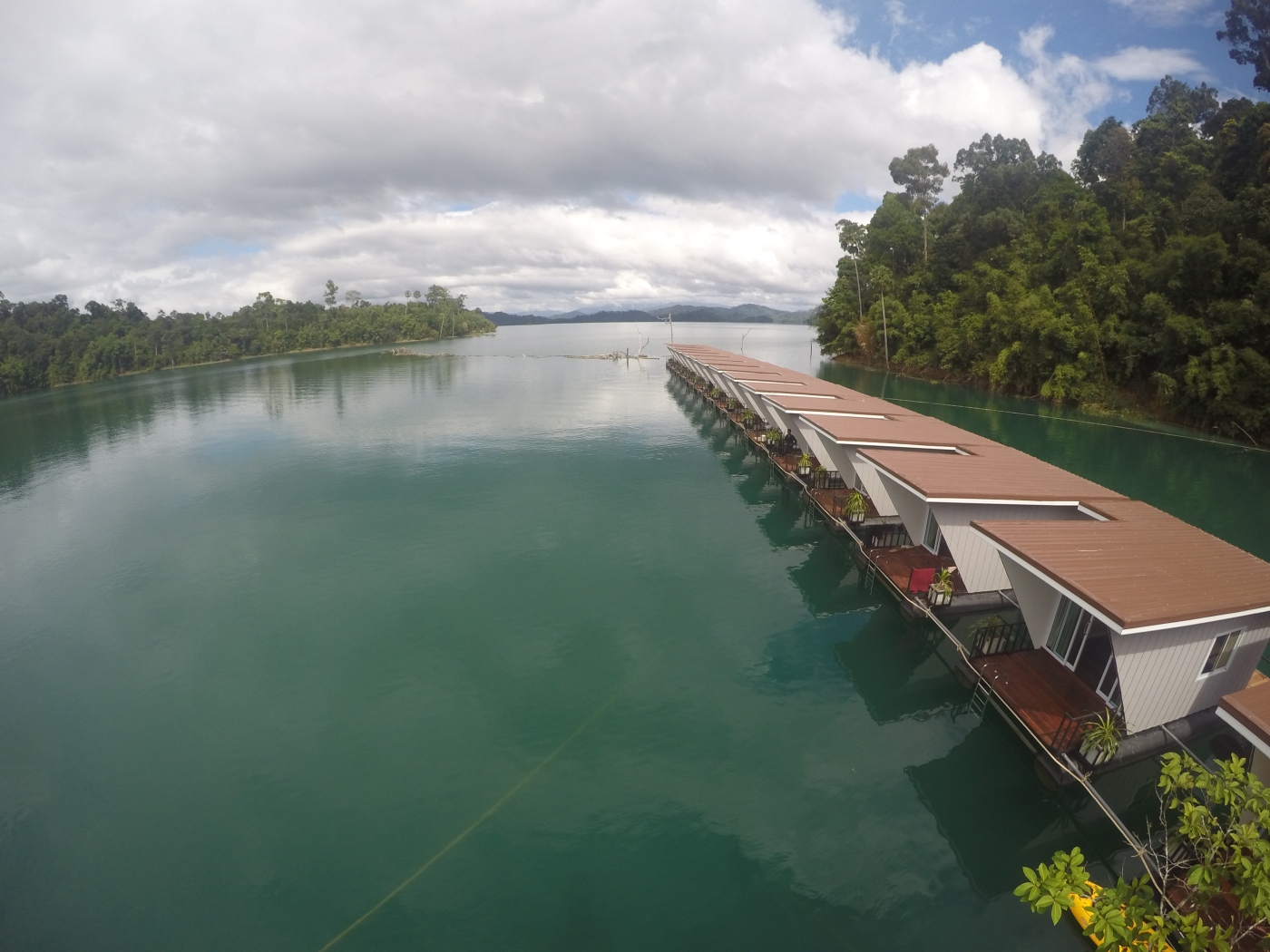 I about a week behind on the blog. I’m currently sitting on a boat nursing a hangover from night one of yacht week. But I’m going to work through the haziness and try to think back. I’ll make today a quick one in an effort to get to the good stuff. Today was a travel day. We left the land of the ladyboys and flew to Surat Thani airport. Air Asia is definitely no Bangkok Airways. Tiny seats in tacky black and red vinyl. It looked like a flying checkerboard. From the airport it was a two hour transfer by van (private, obviously) to the magical land of Khao Sok National Park. Upon check in at our hotel, located in the main “town”, Kim spotted a bottle of wine on display. Before they could tell us our room number she was hitting the red. At least she’s consistent. The hotel manager is an adorable, young Spanish guy. We asked if there was anywhere to get a drink at night and he informed us that the “Rasta Bar” is basically the only game in town. Kim and Brandon got massages while Carly, Nicole and I got another bottle. We went to dinner in town which was completely forgettable and then we headed to the Rasta Bar. We met some Spaniards. They were 4’s. But if you have an accent and you are in the middle of nowhere I’m going to give you an extra point. Being a five will buy you a salsa dance, as long as you are leading. Nicole spoke to them in flawless Spanish. Or “Mexican Spanish” as they called it. I spit some Mexican Spanglish at them until I realized my 10th grade Spangish knowledge now consists of the words “cerveza” and “bano”…and usually in that order. We called it a night.

Today we were headed out to Cheowan lake in Khao Sok for our Chirstmas Eve night in floating raft houses. This lake is man made, after being dammed a while back. We drove about an hour to the dock where we were quickly introduced to our guide, Sam, and hustled into our boat. The beauty of traveling in a big group is that all your tours are usually private. I almost cried when I saw the throngs of tourists at the pier, but our boat left with just the five of us in our santa hats, Sam and our driver. The lake was stunning. Emerald green water with giant limestone karts majestically jetting out everywhere. We passed a few of the floating raft houses, which basically look like Boo Radley’s version of a lake house. These things were big pieces of shit. But don’t worry. Rory booked the deluxe package. So our rafthouses were sleek and modern, complete with flat screen tv’s and a kayak tied to each deck. It was pure heaven. Jealousy inducing pictures included below.

View of the raft houses from the high dive

After lunch, Sam was taking us on a hike to a cave. We set out blissfully ignorant and unprepared for what was about to happen. We hiked about an hour through the jungle, crossing through rivers with Sam leading the way barefoot. He is literally Mogli from the jungle book. Those feet were gnarly. I was sweating my ass off, per usual. Once we got to the cave we realized we would basically be swimming through it, so I took off my clothes and we went in our bathing suits. We climbed up waterfalls, saw more bats then I care to remember, swam through water, all in a cave. When we came out on the other side, we had another hour and a half hike, but no clothes. Have you ever seen a chubby gal hike in a bathing suit? It’s awful. There are just certain movements that you should not do in a bathing suit, which includes everything from bending down in any way to jumping over logs. I could barely stand the sight of it myself, but I cringed every time we passed a group of poor unassuming tourists. To add insult to injury, lunch was not sitting well and I was in constant fear of sharting in my bikini with each step. I literally squeezed my ass cheeks together for about two hours. You know that shit would never go down if I was Girl #1. No, no, no. Girl #1 would probably stopped for a sports illustrated photo shoot during the hike. I screamed if anyone got near me with a camera for fear of my sweaty and uncomfortable clenched face being captured for all eternity.

After the hike, we went back to our floating houses where we lounged around floating in inner tubes and enjoying the most amazingly unorthodox Christmas Eve ever. 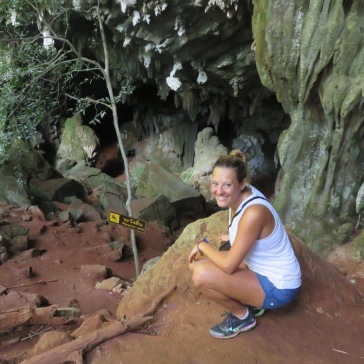 Me at the cave

Merry Christmas losers! While you woke up and greedily opened presents like a fucking five year old, I was up at dawn kayaing around the lake watching the sun rise. After breakfast we packed and said goodbye to our lovely raft houses. We did a hike to a dry cave with tons of bats, along with a few pythons. It was basically straight uphill and the straight back down. But at least my jiggly bits were covered this time. And I didn’t shit myself, so that’s something. On the way back down I was so terrified that one of the park rangers literally held my hand for about half an hour to help my uncoordinated ass down the mountain. It was pathetic. But I’m used to appearing pathetic on hikes. It’s kind of my thing. Remember when I had to hold back tears as I hiked through Mordor in New Zealand?

We were taken back to the dock and transfered back to our hotel where we lounged by the pool until our massages. Carly, Nicole and I had a trio massage. Our masseuses were chit chatting and giggling louder than bitches in the nail salon. I don’t chit chat all fucking day while I’m at work, so why do they get to? Oh wait, does Gchat count? In that case, we’ll call it even. After massages I was desperate for a pedicure. Two weeks of backpacking reeks havoc on a gal’s feet. Our hotel arranged to have the ladies from the only nail salon in town come to our rooms and give some of us a mani/pedi. We then found the only pizza place in town and had PIZZA FEST 2015. I’m going to end this now because I have to go get drunk.

One thought on “A Change of Pace in Khao Sok”