Today we were picked up at our hotel by a lovely man named Tuan who owns a beautiful cooking school outside of Chiang Mai. When looking into cooking classes, I was originally interested in a cooking school on a farm, but that one lasted all day. I like to cook, but an entire day of pretty much anything is overkill. The optimal amount of time for any activity while on vacation is 2 hours. I specify “on vacation” here, because back at home I’ve had boozy brunches that last longer than an entire day. So I hunted down a half day cooking class with a beautiful setting to rival that of the farm. Enter: Pantawan Cooking School. Upon pickup he also casually mentioned that there would be no other people in the cooking class, only us. Now that’s great for us, because there is nothing I love more than private activities. However, that also means there are no self absorbed dolts to talk shit about. We can’t have it all.

The first stop was a local market where Tuan showed us some regional delicacies and the ingredients we would be using during our class. There was a very unfortunate “meat room” in the market that looked like a place Jeffrey Dahmer would go to get off. Tuan pointed at a large bowl and we all turned to find about 40 live frogs blinking up at us. I thought Kim was gonna go all Free Willy on us and release them. Not exactly my kind of “meat market”.

The crew at the market 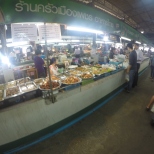 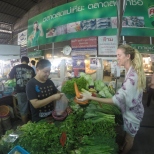 Kim buying stuff in the market

Upon our arrival at Pantawan we were instantly transported out of Chiang Mai and into a garden oasis with an amazing teak wood open-air structure that would be our kitchen for the next few hours. This place was awesome. Brandon found the garden and was in irrigation bliss (I told you they were hippies). Words don’t really do this place justice but you can see for yourself in the pics. The way the class worked is that you watched the chef do a demonstration of each course and then each person goes to their individual station and cooks each dish for themselves. This is useful because cooking for one is completely applicable to my life at home. It was like “Thai cooking for spinsters 101”. We made an amazing massaman curry, spring rolls, cashew nut chicken, and pad thai. And we did almost all of it in a wok. God I fucking love woks. They are just so much better than all other cooking vessels. They get crazy hot and cook food super fast, so they are basically god’s culinary gift of efficiency. And you all know about my passionate love for efficiency that borders on crazy. They also make you look like a bad ass chef. Or a Panda Express chef. Not that there is a difference in my book. 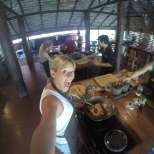 Our vegetarian hippies were catered to for each course – another reason those individual cooking stations come in handy. The highlight was when we made pad thai in the wok and learned to wrap the egg around the noodles in a little bundle and then flip it and slide it onto the plate. That’s the closest thing I’m gonna get to making a bundle of joy any time in the near future. Kim actually kicked ass at that part. Which shocked me, because when we lived together the extent of her culinary repertoire was baked potatoes and spaghetti. And I’m pretty sure she thought wine counted as an appetizer. And dessert. And still does. Once we finished our four dishes it was time to feast while overlooking the garden. Okay maybe I lied, eating was obviously the highlight.

After our cooking class we were taken back to the hotel. I dragged Steph and Katie to some tour shops to haggle down the price of a zipline tour for tomorrow. I’m still unhappy with the final price, but they kept letting me walk out when they wouldn’t go lower, so apparently my expectations were not realistic. Kim took a nap. Brandon took a walk and found his first ladyboy. It has been brought to my attention that I have not actually explained what a lady boy is. So for those of you that don’t know, a ladyboy is what they call transvestites in Thailand. They dress super slutty and some can be a bit aggressive…ly awesome. Some of them really do look like chicks. Some of them look like an asian Gary Busey in skanky women’s clothing. Oh, and a lot of them have tits. I’m not sure if they go all out and chop it off downstairs. I would imagine it varies. And don’t you worry, because I have one hell of a ladyboy story in the blog pipeline. The things I do for you people!

That night we all hit up the night bazaar. Which is basically a giant swap meet where everything is negotiable. And negotiate I did. I negotiated the shit out of that bazaar. I’m the girl who drives 40 minutes to the swap meet in Irvine because they sell my moisturizer for $10 cheaper than target and I can get my hair cut for $14. I love swap meets. And I love a good deal. But you wanna know who does not love a good deal? Kimberly fucking Ortloff. She tried to stifle my bargaining flow at every turn. Why, you ask? Because she is the poster child for bleeding hearts. And so she went on a mission to make sure every “adorable” Thai person in the place made a sale. To her. Anyone who told her she was their “first sale of the night” got an automatic purchase out of Kim out of pure sympathy. She was making it rain baht like crazy up in that market. And when I would try to negotiate on her behalf she would say “Rory! Jeeez. No no, that price is fine. I’ll take three. Make that four. Wrap it up. Brandon, pay the man”. Her rationale was that when everything costs a couple bucks, who really cares? Me, that’s who. I am a shiesty Jew who gains immense pleasure from haggling. My mother used to literally send me into places to practice negotiating as a child. It’s been ingrained in me from a very early age. It is a sport. And I am the MVP. Finally…MVP of something. Steph and Katie have traveled with me extensively and so they know the drill. If you find something you like, you tell me. Then I negotiate it for you. This way the girls get to shop, and I get to bargain and every wins.

For those of you who don’t know, there are some rules to haggling efficiently and respectfully. Let me enlighten you so that you don’t look like a fucking amateur:
1. Don’t be an ass hole. They know its a game. You know it’s a game. Have fun with it. Smile. Be good natured. Everyone should come out a winner. Especially you.
2. Decide what you want to pay before you start. Not going in with a price in mind is like going to a shooting range blindfolded. You need to know what general price people are charging for the same item. Do some reconnaissance. Ask around and see what people are charging for the same general item. Then cut it in half and that’s a good place to shoot for. If you are white they automatically double the price anyway.
3. Never take the first offer. Or the second. Maybe the third. It’s a chess game. Even Bobby Fisher needs a few moves.
4. If you are buying more than one, get a discount for it. Buying in bulk saves you money at Costco…why not when buying tank tops with elephants on them? Like when Steph, Katie and Kim bought ten fucking pairs of those ugly ass parachute pants at the bazaar. I was practically foaming at the mouth as they picked out pairs of pants because I knew that meant a better price.
5. Ask for the “pretty girl” discount. I know, it sounds ridiculous. I don’t use this one too much anymore. Because (1) it doesn’t really work in Asia where I am bigger than most men and (2) father time seems hell bent on taking this option away. But in Marrakech that shit worked like a charm in the souk. They don’t call me Fatima Couscous for nothin’.
6. WALK AWAY. At least take a few steps. If they don’t come after you, you know their floor. This is useful information for when you get to the next booth where they are selling the exact same shit.
7. If it is actually unique and you really want it, swallow your pride and just get it. I know, it’s tough. But you’ll kick yourself later. Trust me.

After a marathon shopping run, we hit up our favorite beer garden and settled in for an evening of live music, beers and food. Kim sniffed out the wine bar cart within about 12 seconds of entering. Katie and I pondered over the Mexican food cart but wimped out once again. Steph ate another big ass fish.

You do not want to miss tomorrow’s blog. Spoiler alert: ladyboys like WHOA.  I leave you with a throwback to the “Headshots du Jour”:

Steph and her fish

Me in the Beer Garden 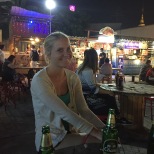