Do you guys want to know my favorite part about traveling? I mean, I have lots of favorite parts. Discovering new places, experiencing new cultures and different foods, putting myself in various forms of danger. Blah, blah, blah. But what I really, really like is that look of jealousy in people’s eyes when you come home and are so incredibly fucking tan they wonder how you took on a different ethnicity while you were away. The fact that being tan makes you look skinnier doesn’t hurt either. So today and tomorrow I’m getting my tan game together hard. The plan is to lay in the sun, drink wine, and enjoy my last few days in France.

We have a leisurely morning. Steph morphs into an old French woman and wakes up early, goes to the market and gets some fresh veggies, fruit, bread and eggs for breakfast. The only thing better than fresh eggs for breakfast – fresh eggs with truffle cheese on them. The last of the famous truffle cheese that launched a thousand calories – to my thighs. And just like that, Thursday is off to a great start. Feeling rather classy after our lovely afternoon at Nikki Beach rubbing elbows with fancy people the other day, we head down to the famous Cannes Croisette and settled in to some overpriced lounge chairs at one of the beach clubs. After a few hours in the sun, we had an overpriced lunch with some overpriced Rose. Normally I hate expensive shit, but something about spending money in France just makes you feel like you fit in. Yup, sitting in a Target bathing suit cover-up while eating a $30 salad just makes you feel better about yourself. One thing that was worth the price – the view – of the waiters. Granted, the adorable French waiters wanted nothing to do with three sun-beaten and road-weary mean girls from America. But you can’t blame an old gal for admiring the help.

View from the Croisette

After an incredible lazy, expensive and fabulous day we headed back to the apartment for happy hour. During happy hour we got ready for dinner. Ever the proponent of efficiency I drank my wine in the shower. Now, don’t go reading the twelve steps to me just yet. It’s perfectly normal to have a glass of wine in the shower. And take a picture of it, like I did for you below. It’s actually quite enjoyable. What else do you think the French had in mind when they put that seat in the shower? Because from the smell of things on the train yesterday it sure as hell isn’t to hold soap. I’ll have you know that I drank in the shower on Friday too. Champagne. I quite literally, had a champagne shower. If booze in the shower isn’t a commitment to vacation, I don’t know what is. I thought about adding it to my routine once I return home – but I usually shower in the mornings. And that would obviously be crossing the line. It’s all about boundaries, people.

Wine in the shower

Steph found a cool wine bar with tapas on tripadvisor, so we headed down for a drink and and some food. It was empty, but we were greeted warmly by a boisterous British woman so we felt right at home. We had a fabulous bottle of red and some small plates. Our general plan for the night was to enjoy a light dinner (very unlike us) and then hit up the classy hotel bars trolling for rich men. Or just men. Or people in general, actually. What can I say, I wanted to take this tan out on the town! First stop – the Majestic. Totally dead. Second stop – the Intercontinental. Not dead – but judging by the Rick Steves tour group that rolled up as we entered, it was about as close to dead as you can get.

On our way to the next hotel, the Martinez, we saw two skanky looking French women. They looked like skanks with a plan. A plan that probably involved a “sail of shame” home from a mega yacht tomorrow morning. So we followed them. Well, I followed them, and dragged the girls with me for a few blocks. But they walked really fast in their stilletos. And I have a sprained toe. Oh, did I forget to mention that I sprained my toe trying to take a piss in the dark last night? Must be that early onset osteoperosis. So we just gave up and got gelato. In our defense, if you are going to give up on a night out to eat gelato, this was the gelato you want to do it with. And there is milk in gelato – that’s good for my old bones.

Some “Headshots du Jour” for your viewing pleasure: 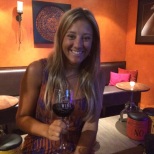 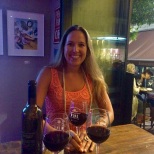 Today was pretty much a mirror image of yesterday. Same breakfast, same beach club, same beach chairs, same lunch…we even went back to the same wine bar. The crowd at the beach club was a bit more varied today. Apparently Friday is “take your trophy girlfriend out to lunch on the beach day”. I’ve never seen so much arm candy in once place. I think it must be a rule that if you have a rich boyfriend you can only eat half your lunch. There was some serious “Girl #1” action going on at that beach. I’m talking dressed to nines, a full face of makeup, and perfectly quaffed hair. The only thing these girls were missing was a personality. But they aren’t there to talk. And then there was us…the banana boat trio. With sand up the ass.

After my shower happy hour and a return visit to the wine bar we headed out in search of dinner. We had officially given up on nightlife in Cannes in September, so we at least wanted one last gluttonous French meal before leaving. We came across BOBO’s restaurant. It was packed, the name is awesome, so we got ourselves a table in between some nice French lesbians and some Russian mean girls. There are only two words you need to know about my meal: Truffle Gnocchi. The most heavenly plate of food I have ever eaten.  Or at least top 2.  The other contender being a truffle gnocchi that I had in Slovenia a few years ago.  That is high prize considering the amount of food I have consumed in my lifetime.  But seriously – nothing beats truffle gnocchi. Needless today I went to bed happy.

Tomorrow we fly home….tune in for my next rant about the atrocities commited by Air Canada.

2 thoughts on “The Art of the Travel Tan”