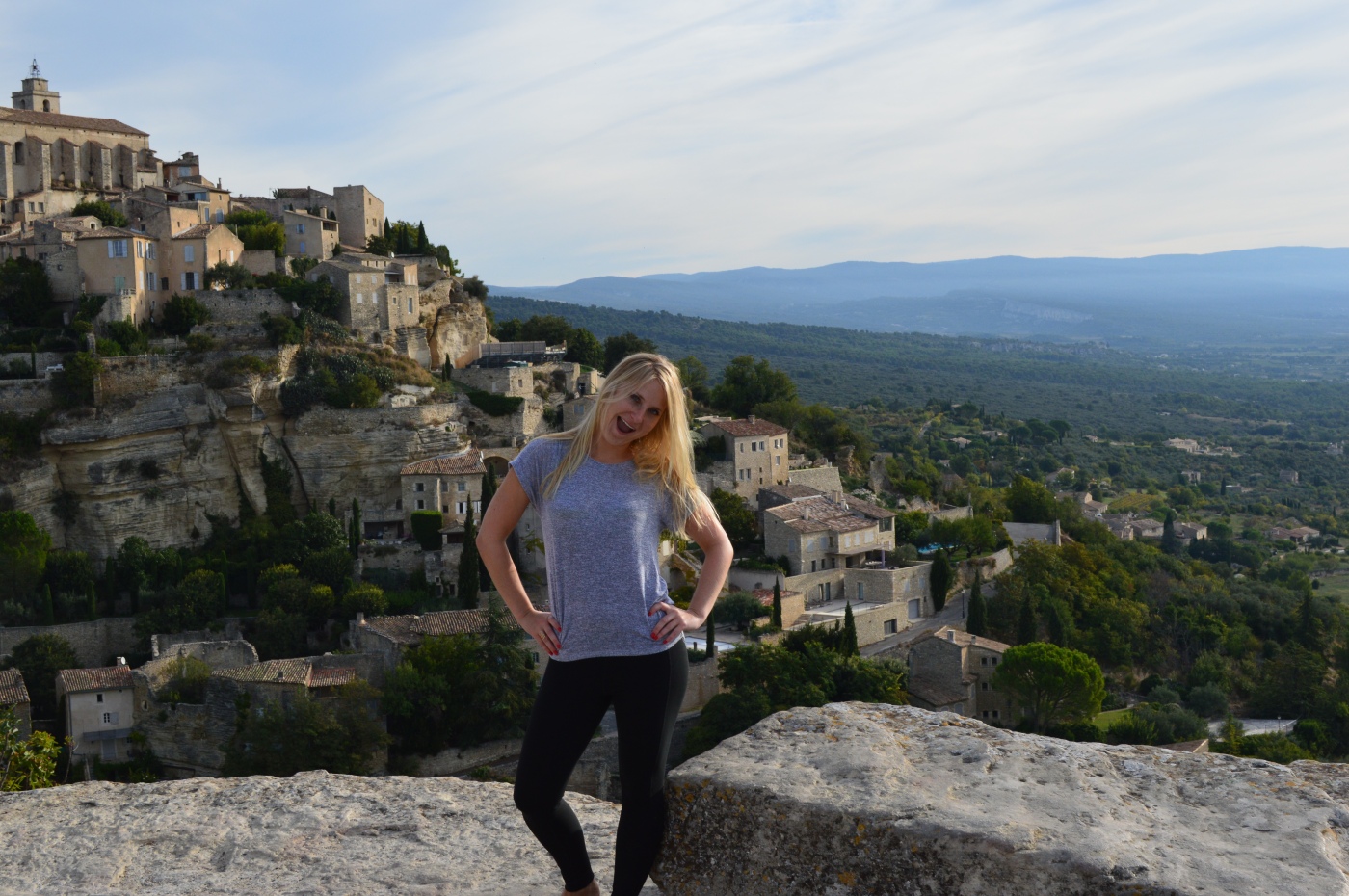 This morning we had to bid adieu to our fabulous villa.  But we did get a peak inside the garage – and villa man is putting down some serious automotive game.  Villa man is looking better and better every day.  Please start peer pressuring  Jorgie to call him.  She has his cell.  On our way out of town we stopped for our “Headshots du Jour”: 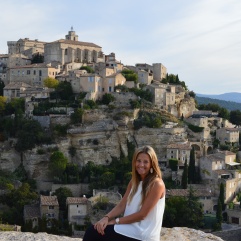 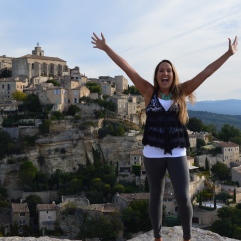 Today we were headed to our next stop: Cannes in the French Riviera.  Along the way we stopped in Aix en Provence to have a look around.  Aix reminds me of a mini Paris.  We strolled through the streets and found some fun markets and did a little shopping.  And then we decided to do the most Parisian thing we could think of – have Indian food for lunch.  There is only so much baguette a gal can take.

After a few hours in Aix we made our way to Cannes, dropped off the rental car from hell, and checked into our air bnb.  This is my first time using air bnb, and it kind of rocks.  We have a super cute two bedroom, two bathroom apartment just steps from the Rue d’Antibes in Cannes.  I won’t talk money, cuz I’m a lady, but it was a good deal.   France hotels don’t really cater to our “three’s company” vibe.  They are not down with  three in a room.  Which is odd, considering these hedonists invented the phrase “menage a trois”.  And no Brett, I have not decided to take your advice and throw in the towel and bat for the butch team.  I’m simply making a point.  But alas, this country is built for couples – not a trio of friendmooners.  I think its discrimination.  Perhaps I shall start a campaign to champion the rights of the “single lady”.  I could be the Bruce Jenner of super cool unmarried chicks with awesome friends.  And my cause already has a theme song, courtesy of Beyonce.  One that I know the choreography to, courtesy of every wedding that has happened in the past five years (and Allie McDonald’s killer dance moves).  My greatest fear is not having to travel solo, it’s having to pay the dreaded single supplement.  That must be something people in relationships who are secretly miserable came up with to punish us single people.  Not to worry through, because I live in LA.  I could probably through a rock and hit an awesome single girl with a disposal income to travel with me.

So we took a load off in our fabulous apartment fit for three and popped a bottle of champs.  My friend Suzanne was here on her honeymoon a few weeks ago (no single supplement required) and recommended a bar for drinks, so we downed our bubbles, put on our Tuesday night best, and headed out.  Turns out “end of season” in the French Rivieria translation into “drinking alone”.   We were the only people in the bar.  So we had a drink and headed out in search of greener pastures.  We had a mediocre dinner and called it a night, determined to try again another evening.

Game plan for today: The hilltop village of Eze and Monaco!  We headed to McDonalds for breakfast in true tourist fashion.  We have been trying to find a McDonalds for about a week, once the baked goods started getting a bit old.  Yes, I want your pity because I’ve been forced to eat chocolate croissants for breakfast everyday for a week and the routine is just too much to bear.  We bought a day pass on the train and headed up to Eze, where we then waited for to catch the bus up to the town.  After standing around with some other tourists for 20 minutes, someone came out and told us the bus is not running today.  When we inquired as to why that is, we were told “it is not a good day for the bus”.  Whatever the hell that means.  The unwaivering French commitment to respecting other people’s time, at work once again.  So we scrapped the Eze plan and jumped back on the train to Monaco.

Once we hopped off the train in Monaco we got a little lost.  Only I could get lost in a city smaller than Hermosa Beach.  A hot guy stopped to helped us and we creepily followed him into town.  Jorgie quickly spotted the wedding ring though – she’s got eyes like a hawk when it comes to gold bands.  We checked out the Casino, which was a bit underwhelming and doesn’t open till 2pm.  I guess because only poor tourists are awake before 2pm and they don’t want us riff raff in their casino anway.  So we decided to grab some lunch to kill a few hours until it opened.  We stumbled upon the Fairmont, which has a Nikki Beach on the roof.  And you all know that there are few things in life Rory loves more than a pretentious pool party on a roof.  So it was the obvious choice for lunch.  A nice, abeit overconfident, man in a great suit asked to join us at our table until his dad arrived to meet him, and we were pretty thrilled.  It’s not every day we get hit on by a rich guy.  In fact, it’s not any day that happens.  Ever.  He had some great lines like “you guys are accountants? wow, I must be going to the wrong accountant”.  Smooth.  He also did a bit of name dropping….like when we told him we were staying in an air bnb and he said the creator of air bnb was a friend of his and stayed at his house in St. Martin.  I know it all sounds corny and a little sleezy.  And it was.  But we ate it up.    When his dad showed up with what I can only assume was step mommy #5, he was gone.  Probably off to their mega yacht.  And all the flirting in the world couldn’t get us onto a mega yacht in Monaco.   But let the record show we gave it a shot. 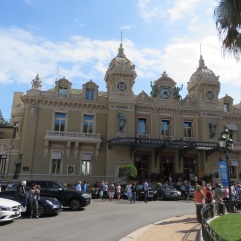 Nikki Beach was a little dead, mainly because the boat show was in town.  I did bust out my selfie stick at one point, because what the hell.  After lunch we walked over to the marina and saw a giant balloon that said “Mega Yacht Owner VIP Party”.   I can’t think of any sentence in life that makes me more aware of my complete and utter medicority.   I probably couldn’t even get into the “Random WordPress blog owner VIP party”.  I’m trying to think of something I wouldn’t have done to get into that party.  Nothing comes to mind at the moment.  Not one thing.

After a quick trip to the only Starbucks we have been able to find (yes, Drew, I got you a mug), we headed back to Cannes.  We hopped off the train on the way home for a little stroll in Villafranche sur Mer and our “Headshots du Jour”.  I must say, I’m pretty impressed with our commitment to the headshots.  We’ll be match.com’s spotlight profiles of the week in no time.  Although the losers on those websites probably don’t even own a car, much less a mega-yacht.

Tonight I had big plans.  Plans to do something that I only ever do when I’m on vacation, because if you can’t do it on vacation, when can you?  That’s right, it’s Carbonara pasta night!  We found an awesome little Italian place on tripadvisor and headed over to get our gluttony on.  Once we arrived the cute little Italian waiter told us that they were full with reservations for the night.  Refusing to take no for an answer, Steph continued to stand in the doorway staring at the people eating their giant bowls of pasta with pleading eyes.  It worked.  We were in.  Well, we were actually out – they sat us outside since that was the only table open.  But we’ll take it! A pizza, three bowls of pasta and two bottle of wine later we were all tucked away in bed by 10pm – a glaring reminder of just one of the many reasons why we were not at the mega yacht VIP party.  A glaring reminder that we are, without a doubt, girl #2.