Today we are leaving Cala Gonone. So naturally, we wake up to news from our Hotel Manager that the sea is finally ok for sailing. Go fuck youself. Ok, I didn’t actually say that out loud, but I’m sure I said it all over my face. We were heading north today to our next destination, Baia Sardinia. On our way, we figured we would visit what our hotel owner called “the most beautiful beaches in all of Sardinia”. High praise, right? So off we went to find Oasi di Bidderosa. Bidderosa is actually some kind of nature reserve with 5 beaches along the coast.  They’ve come up with a fool proof naming convention for their beaches.  The first one is called “beach #1”, followed by “beach #2”, and I think you get the gist.  I read something online that said you could rent quad bikes and go from beach to beach, but couldn’t find any solid info or details online to substantiate that. So we show up at the ticket booth and ask the surly attendant if there are quad bikes to rent. The woman looks at us like we are out of our minds. First time the internet has ever been wrong. Ok, my mistake, off to the beaches we go. We decide to start at beach #5 and work our way back, as we assume everyone else will do the opposite. What do we see when we show up to beach #5? You guessed it, a row of quad bikes. Apparently there is a quad bike tour, but the woman who works here EVERY FUCKING DAY can’t be bothered to know about it. Odd, to say the least. I’m gonna go ahead and assume she’s the same person that named the beaches.  It’s almost as bad as the chick in New Zealand who didn’t know the name of the street she fucking worked on. Disappointed by the human race, once again.

The beaches were okay. Not really sure what the big fucking deal was, honestly. Calling them “the most beautiful beaches in all of Sardinia” seem like a pretty gross misrepresentation, bordering on negligence. But whatever, we just drink Rose and sleep while at the beach anyway. Nothing too notable happened. They had a “restaurant and bar” at one of the beaches, which was actually a shitty food truck with a refrigeration system. Same same but different. The guy laughed when we asked for five beers. Not sure what was so funny….

Beers on the beach

We got to our hotel around 6pm and checked in. Upon check in we inquired about a boat tour tomorrow and told the receptionist to sign us up. I’m finally gonna get on a boat! The hotel is pretty nice. It’s right on the water, with a lovely view of the coast and the Maddalena archipelago. There lots of little pools everywhere. Seriously – like 5 pools, but not one fucking hot tub? The rest of the world needs to get on the hot tub train. I think your hotel should actually be demoted a star if you don’t have one. Our room is extremely small and decorated in what they call the “Classic Sardinian” style. Apparently the direct translation of “classic sardinian” is “Designed by Lucille Ball”.   But we aren’t exactly the hippest ladies around, so glass houses…We are staying half board, meaning we get breakfast and dinner. So we showered and headed to the dining room. Each room has their own assigned table, and from the looks of where we were sat, you would think we were the help. I seriously contemplated making it an issue, but the fact that my ensemble was not up to dress code (no flip flops or tank tops allowed) put me at a fairly significant disadvantage. Arguing that you are deserving of classy treatment when you looked like you just came from the beach is an uphill battle that I just wasn’t willing to fight. Dinner was fun, mainly just because you get to order three courses and the waiters were all dressed up in blue jackets (very cruise ship-esque according to Steph). Rory loves a three course meal. And being served, in general. Mental note for tomorrow: dress like the first class passengers.

Sunset at the hotel 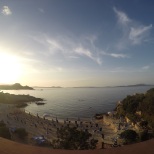 View from our hotel

After dinner we went to the receptionist to give her the deposit for the boat tour. Remember how excited I am about finally getting on a boat? I should have known better. Boat tour for tomorrow is apparently all full. No room for the three ladies from steerage. Mother fucker. Now, I know what you are all thinking – Rory, if you are so good at logistics, why wouldn’t you reserve a spot on the boat before you got there? Well no shit sherlock. Don’t forget who you are dealing with here. I tried. I emailed our original hotel three times. Then when they didn’t respond, I got pissed and decided that hotel was too expensive to not get a fucking response via email. So I switched hotels. And emailed them twice. Again, no response. Frankly, I’m a little disappointed you have such little faith in me to even ask such a question – you all should know better. The truth is, the tourism industry in Sardinia is just not sophisticated enough to handle things like “emails from guests” or “reservations”. Anyway, no boat tour – the only other option? The dreaded 70 person boat. Unless this is your first blog, you should know by now that I fucking hate most humans. Maybe hate isn’t the right word. Despise? Loathe? Fear? Take your pick. Because they are annoying. And rude. And have a SERIOUS lack of respect for personal space. Remember how the beach goers from hell pushed in line to get on the ferry a few posts back? Well the 70 person boat tour would be that times a million. All day long. I would rather swim in a bathtub all day.

Obviously, I came pretty damn close to losing my shit on the receptionist. When things don’t go my way, I become a petulant child. Except instead of giving me candy, you have to give me Xanax to calm me down. So we told her to get us on the Thursday boat – she said she would try. We don’t really believe her. But for now, prescription meds and a night of sleep will have to suffice. Tune in for tomorrow when we refuse to except defeat on the nautical front…

3 thoughts on “Beaches, Beer, and the Neverending Quest for a Boat”