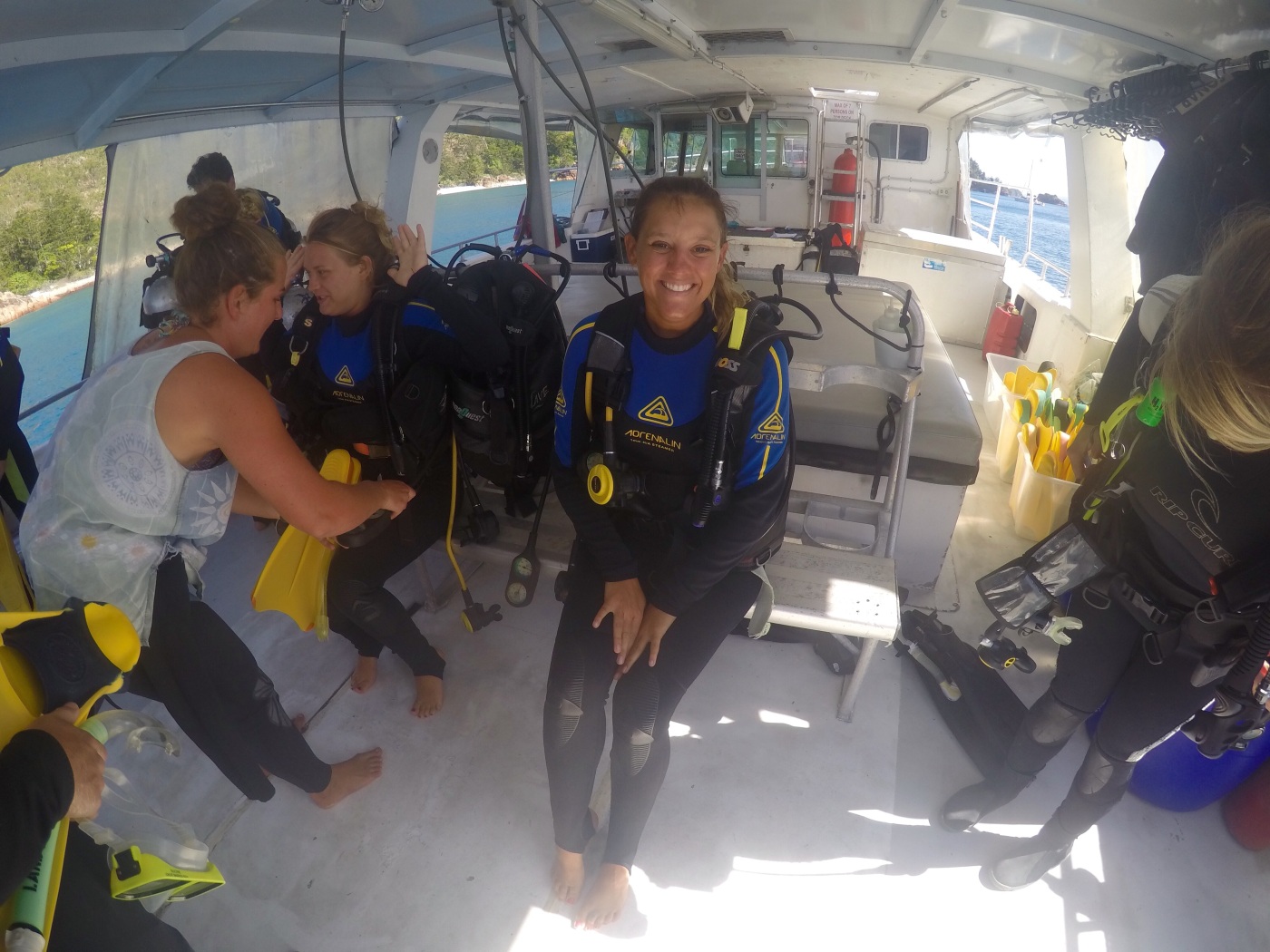 Today we set sail for the Whitsunday islands. But not till noon. So this bitch is first getting a desperately needed pedicure. You ladies know what camping does to a gal’s feet. Or perhaps you don’t, in which case consider yourself lucky and stick to condos. We then sweated our balls off as we lugged our beer all the way down to the dock in the blazing fucking heat. The boat is BYOB. BYOB + not knowing what kind of people you will be trapped at sea with = GET LOTS OF BOOZE. You could wind up with a group of super cool people you want to get drunk with. Or you could get stuck with a bunch of morons who need my seminar in which case you will want to get even more drunk. Sadly, we wound up with the latter. I honestly don’t think I have ever seen such a sorry group of losers in my life. I think there should be a rule that your cool/cute factor determines which boat you will be on. If that were the case, all our boat mates would be on the fucking Nina, Pinta and Santa Maria. And we would be on P. Diddy’s yacht. Fugly boring faces don’t belong on a catamaran. Rory and Stina belong on a catamaran. Please get on the wooden boat at the end of the dock and leave the A-team alone.

But since I don’t run the world (yet) we quickly learned we were in a dire situation. It took about 4 minutes before we were saying “thank god we have each other”. Now, let me run through the list of characters. I didn’t bother to learn anyone’s name, but we don’t use real names here anyway. Let’s start with those we can stand: The Canadian guy – old and kind of weird, talks like a robot, but he’s harmless, as all Canadians are. Then there is a British gal and her mum. We hate all the same people and share a cabin with them. They are, dare I say, normal. Although not much by way of entertainment. We are merely talking unoffensive. And then there is everyone else. B team doesn’t even begin to describe these losers. I’ve taken to calling them team-27 because there just aren’t enough letters in the alphabet to describe this group. There are some German girls who look confused and baffled every second of the day, like they are about to wet their pants at any moment. There is a German couple who talks about nothing but scuba diving all the time. I thought they were pretty insufferable until they started dirty dancing (sober) on the boat on day 2, and then I decided there might be hope for them. Hope for them to entertain me. And now we get to the real problem. The group of people that I immediately know may result in my being marooned on an island for fighting: the group of British friends who all met working in a hostel (warning sign #1). Now, you would think that people who have spent the past few months cleaning bathrooms and kitchens and making people’s beds would have a little humility. This group of five is the most entitled, uncouth, rude, selfish, obnoxious group I have ever come across. It took them all of 5 minutes to completely invade our personal space and try to sit on top of us on the nets. If my life were a game of “would you rather”, I would rather take the B+ team America girls ANYDAY. I’m afraid of what I might do.

Now let’s get back to the itinerary so you can see some pics. Stop 1: Rory’s first attempt at scuba diving!!

It was just an intro course, so we didn’t go too deep (that’s what she said), and I didn’t see anything exceptionally cool, but it was fun to put on all the gear and pretend like I knew what I was doing. One couple that was diving held hands the entire time under water. I shit you not. I hate couples that do that crap. We all know you are together. And it’s because no one else wanted either of you. Take it down a notch Ariel and Prince Eric. The German scuba diving experts got yelled at by the captain of the scuba boat within about 14 seconds for doing some stupid shit that certified divers should know not to do. Typical. After that stop we had tons of time to do more snorkeling. Stina and I instead took out the paddle boards, which was one of the main reasons we chose this boat, as none of the others had paddle boards. Our captain literally drove the dinghy into us until we fell. Multiple times. Rude.


Then we settled in to the boat for the night and watched a beautiful sunset until it was time for dinner. The scum of British youth making up team 27 will literally check your ass if you try to get in their way of food.

They will literally run to the kitchen and push you out of the way. One of the girls is super fat, so she should slow down and her friends should support her in this endeavor by doing the same. You are on a boat in paradise. SLOW YOUR ROLL. The Queen Bitch of British team-27 keeps staring at me. Every time I turn my head, she is staring at me. I don’t think she has seen a black person. And by black person I mean a really tan ass bitch. If there is one thing I can’t stand, it’s a bitch with a staring problem. Oh, and she looks like a man. And her boyfriend is a ginger. A really gingery one. My fists were clenched most of the night. Want to suffocate her in her sleep. I realize this is not normal. But if you can’t be honest about homicidal feelings on your blog, where can you? Anyway, Stina and I got drink while people sat around being boring. In bed by 10. Air con out of control. Like sleeping in a wind tunnel.

I woke up at 5:30am with the sun, and the beginnings of an ear infection. I’m like a toddler at the YMCA once I get in the water. Ear infections for days. I literally travel with swimmers ear medicine at all times. I even put it in last night! I also woke up being spooned by Stina, so there’s a silver lining if I’ve ever seen one. She is quite limber if I do say so myself. We had breakfast. Well, the obnoxious British fuck tards had breakfast like apes who have never seen a civilized meal and then the rest of us ate once the animals had been fed. It was immediately time for snorkeling, which was out due to my ear, so Captain Tim drove me around in the boat and showed me some coral. Then I did some paddle boarding, which I much prefer to snorkeling anyway, so the FOMO (fear of missing out) was not a factor. However I did miss my chance to drown the British man-girl. We then moved to Manta Ray Bay where everyone snorkeled (Stina and I paddle boarded) and no one saw any Manta Rays. Some bitch yelled at me for taking too long on the paddle board because she wanted to do it to. Must I refer back to our three rules of traveling? STATE YOUR PURPOSE. I’m not a fucking mind reader who walks on water. I’m just a bitch on a paddle board. You don’t get to cry when you don’t ask.

Then it was finally time for the piece de resistance: Whitehaven Beach. If you google image Whitsunday Islands, Whitehaven is what you are looking at. It is, without a doubt, the most beautiful beach I have ever seen in my life. And y’all know I get around. We walked down to the beach where our boat maid man (who we called mom, as he is responsible for the cooking and cleaning on the boat) asked if we all wanted to get some fun group pictures. Stina and I didn’t even break a stride as we yelled “NO!” and kept it moving. We spent the afternoon on this amazing little strip of paradise. Now, I’m not one for a big photo shoot. I’m a snap a few pics and get on with enjoying life kind of gal, but we may have had a mini European-girl moment out there. So pictures ensued.

When we left the beach the Dukes and Duchesses of Doucheville, who were last to arrive and made everyone wait for them, decided that getting on the first boat was a life or death situation. God forbid their Royal Highnesses of Hostelworld wait 8 minutes for the next dinghy. When we piled in there were too many of us on board, so the boat maid asked one of boys to get out and wait for the next one. He refused. I shit you not. Threw a fit and refused to get out like a petchulant child. This is the shit we are dealing with here people.

Once we got back on board I was terrified I might kill a member of the High Court of Entitled Punks. Thankfully Captain Tim (who we called dad) invited us up to the Captains Suite for a bit of reprieve from the douchbaggery.

And that is basically where we remained until dinnertime, annoying the shit out of the Captain. But let’s all honest, he loved us, as Stina and I are always the favorites of whoever is in charge. Always. So we sat up in the perch, looking down at the lay people. Our rightful place in life. Nightfall came, Stina and I hit the beer. They showed a slideshow of all the pictures that were taken. Stina and I weren’t in a single one. Literally. It was hilarious. At one point I asked Stina who “that dude” was in one of the pictures. It was the Team-27 man-woman. I got up to lay my towel on the back of the boat and ran into ze German couple going at it like rabbits on the nets. At about 8pm. With 17 other people about 10 feet away inside. I knew they’d be good for something ridiculous. Although the husband has an inny-outty and his fat bulges out of his tiny little swim suits. He kind of looks like Shrek. So his naked ass was clearly last thing I wanted to see. Got drink and went to bed. I slept outside, as I had enough of the air con from hell-hath-frozen-over.

One thought on “Captain’s Suite in the Whitsundays”