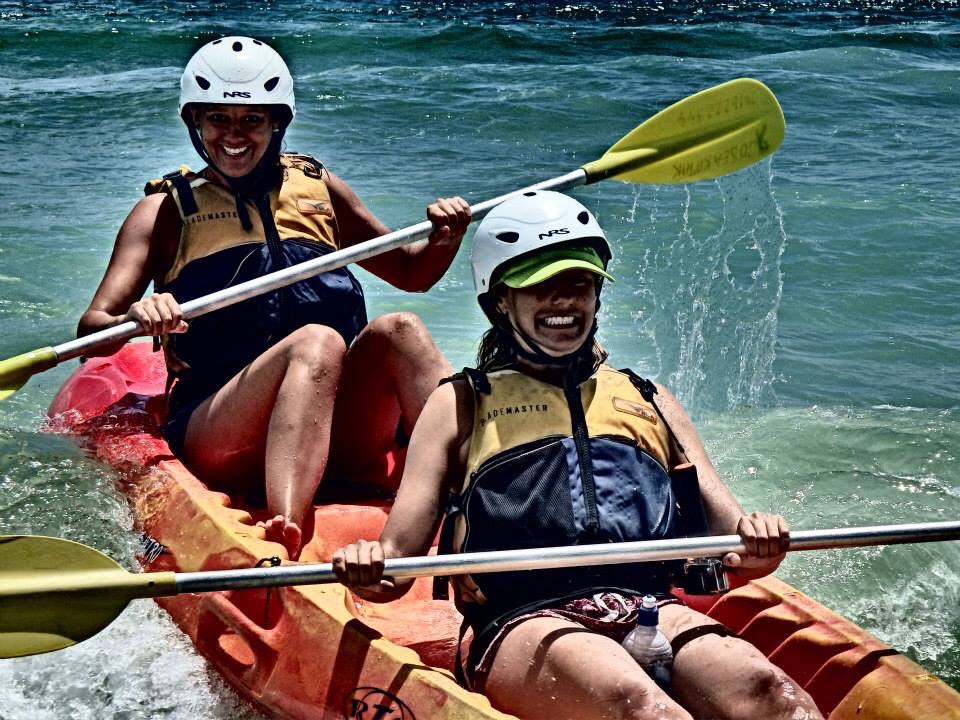 Today is Sunday, January 4, 2015. Today Stina and I double puked off the side of a kayak. And had to be towed to shore. I know you are all a little confused as to how we got here, so let me take you back. Back to last night….

Tonight was Rory and Stina “hit the town” party night. When the big 3-0 is only a few months away from sucking all joy from your life and replacing it with cellulite, you have to plan these nights well in advance. Because you can’t do it 5 times a week like you could when you were 19. Let me re-phrase, you shouldn’t do it 5 times a week. That shit ain’t cute on 30. The way I drank, it wasn’t even cute on 19. But fuck all that near 30 talk, because tonight, I’m 25. Going-out Rory is always 25. Are you rolling your eyes right now? I deserve that. Whatever, I’m 25 and I JUST WANNA DANCE! After fighting with the cunts for the shower and chugging a few bottles of wine, we headed into town at 8:30pm. The cunts, you see, finally woke up from their lighthouse-induced coma so that they could shower and promptly return to laying in bed sexting. I mean texting. See ya later, suckers. We made a bee-line for Beach Hotel, as planned the previous night. We grabbed a drink and started looking around trying to decide what group of boys to shamelessly hit on first. Just then a group of Aussie cougars came up to us. Well, two cougars and their B-team friend, who was more like a lioness. The cougars told us they were staying IN A HOSTEL. I about choked on my drink. Homegirls were knocking on 40. I can only imagine what fucked up shit they are doing to unsuspecting young tourists boys at that hostel. But then lioness came into town today and made them move to an air bnb, because she has birthed a child and has no fake tits and can’t be caught dead in a hostel (good for you, lioness). Apparently they are planning a trip to LA to make a movie, which is based on a book the lioness wrote and one of the cougars is adapting it to a screenplay. It’s basically a pathetic cougar tale that is a cross between “How Stella got her groove back” and “The Hangover”. Newsflash: even Stella knew to stay away from hostels. This entire convo ensued without the cougars noticing Stina and I giving each other the “how fucking pathetic” look. Go us.

The cougars did, however, explain to us why everyone keeps asking if we are Canadians. Aussies can’t tell our accents apart, and since asking a Canadian if they are American is insulting to Canadians, they just always ask if you are Canadian first. Apparently an American could never be insulted by someone assuming they are Canadian. It actually makes a lot of sense, since Canadians are like the teddy bears of the world. The teddy bear that you had when you were 5 and now you aren’t sure where it is and don’t really give a shit, but still think of it fondly on very rare occasions. But I guess thats something.

So now we are deciding, with input of the cougars, what group of men we will all hit on. It’s scaring me how well I am getting along with these ladies. Shit. Big fake titties cougar finds one she likes in a blue shirt, so I grab him by said shirt and haul him over to us (subtly is not my strong suit). He was with a big group of dudes, but the only hot one. So naturally, he immediately fell in love with Stina and I spent the night talking to his not-hot friends. Well, one was hot, but his teeth were fucked. Fucked up teeth knocks you down to an automatic 3, regardless of whatever else you got going on. Seriously, if you can’t fix your future kid’s teeth, do them and the world a favor and just sterilize yourself. But I digress. The cougars realized they had nothing to contribute and disappeared. No one cared. So you all want to know about the boys. They are all “Footy” players from Adelaide on Holiday. We asked them what the fuck “footy” is, and they spent the next 20 minutes trying to explain “Aussie Football Rules” to us before giving up and showing us a youtube clip. Basically, it’s a cross between American football, everyone else’s football, and rugby. It’s about as stupid as it sounds. I’m assuming at some point a bunch of dorks who couldn’t make any real sports teams got together and made their own sport so they wouldn’t feel left out. They couldn’t even give it a cool nickname.

The good news is that I didn’t bite anyone’s arm. The bad news – I managed to find an entirely new way to objectify innocent men at a bar. Stina’s footy hottie was telling us that one of the coaches is going to check them for “skin folds” when they get back, because they have all gotten so fat on Holiday. What are “Skin folds” you ask? It’s basically where you pinch people’s fat rolls. So naturally I had no choice but to go around to every dude on the team and tell them that I was sent here by their coach to perform a surprise “Skin fold” test on them. Arms and stomach. They were confused, but actually went with it. I was thoroughly entertained for hours. Literally, hours. When the night was winding down at the bar I invited myself over to the house they had rented for an “after party”. Stina was already invited, obviously, to make out with hottie, but as I had no one to make out with I really just wanted to keep raging. The boys obliged and entertained me for a few hours with drinking games, when more drinking was the last thing on earth I needed. We played kings cup, I argued with them about every rule (typical), they bbq’d, I ate a giant hot dog, we drank more, I passed out on their couch. But not before one of they guys (hottie with the fucked up teeth) showed me pics of his Columbian girlfriend and I told him she was ugly, because she was, and he got slightly offended. But I think he kind of knew. So I recorded some video on his phone saying I was going to sleep with her boyfriend (or something of that nature) and tried to get him to send it to her. I thought it was hilarious at the time. While I was entertaining half of the Adelaide fake sports team, Stina was making out with hottie. I mean, “on a walk”…yeah, they pull that same bullshit “bush walk” move over here too. I passed out on the couch. I made out with no fugly dudes with girlfriends. I did not steal anything. This is TOTALLY maturity. Ok, I’m at least halfway there.

And so this brings me back to today. We awoke around 7am in what can only be described as a rental frat house. We high tailed it out of there and caught a cab. Our cab driver asked if we were out for an early morning walk. I replied, “something like that”. He was old, his heart couldn’t take it. Now, when we arrived in Bryon Bay a few days ago we booked a sea kayaking trip for SUNDAY MORNING. What would ever possess us to do such a thing? It is, without a doubt, my single biggest activity planning mistake. For shame. But we had paid in full, so an old buff guy with tattoos who reminded me of Tori Spelling’s husband (just shorter, more buff, and obviously more remorseful) picked us up. Stina told him that we had a “very aggressive” night, so he would know to go easy on us. He loved us instantly and took massive amounts of pity on us (refer to Waiheke post re: old men loving us). We referred to him as “dad” for the rest of the trip. That fucking kayak trip. A day that will live in infamy for at least a week.

We should have known to turn the fuck around the second they gave us HELMETS and told us to CARRY OUR OWN KAYAK DOWN TO THE BEACH. These aren’t little pussy kayaks. Ocean kayaks are gnarly. We dragged that thing down to the beach Weekend at Bernie’s style and were sweating and exhausted before we even got in the water.

Getting through the waves was fucking terrifying, but we managed to get out without flipping over (credit for this probably goes entirely to kayak dad). We started off ok, but quickly faded. Faded fast. And hard. Stina started heaving. Which then made me heave. Before we knew it we were both puking of the side of the kayak. One of the guides (the 24 year old hippy-hot guide) told us he has actually never seen a double puke off a kayak before. We are trailblazers. To add insult to injury, we didn’t even see any damn dolphins or whales, not even a turtle, which is the whole point of the fucking trip. Stina thinks it’s because we puked in their house and they were mad. But people piss in there all the time and no one says boo. It became very clear that there was no way Stina and I were getting ourselves back to shore, as we were still intermittently vomming into open ocean. So dad tied a rope to our kayak and literally towed our sad, pathetic assess all the way to shore. Everyone on our tour hated us. Because we puked, smelled like booze, complained a lot, and got lots of attention from the guides (like the extra attention given to kids on the spectrum, not because we are charming). I think you all know where the rest of this day is headed….we went to bed. I typed this blog, so that’s something. Oh, and we ate our thousandth pizza of the trip.

4 thoughts on “Death by Kayak in Byron”