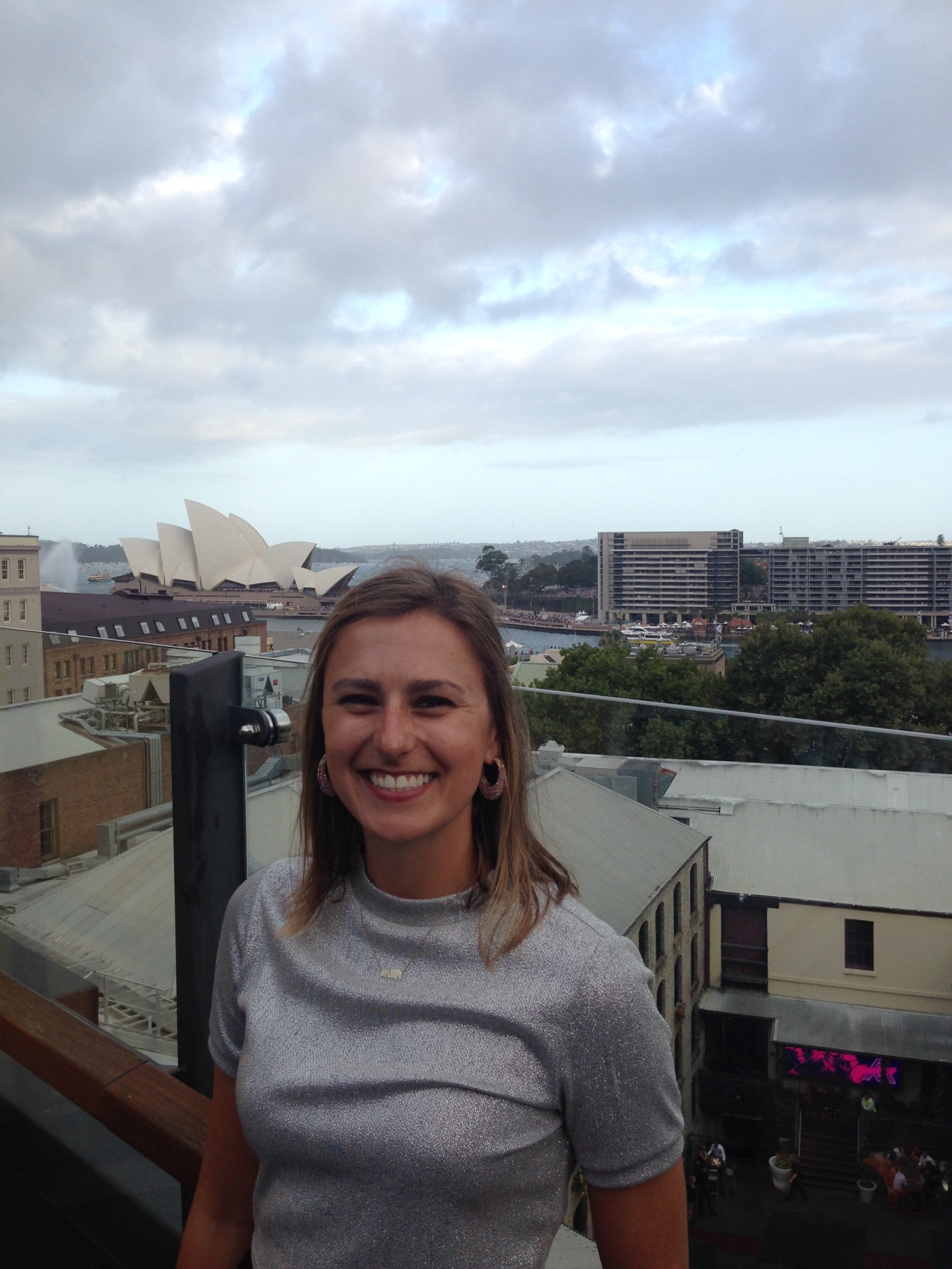 Today I woke up feeling like I had been hit by a truck. I honestly felt so shitty that I thought I might have the flu. So I had to forgo beach day at Manly with Stina and instead spent the entire day in bed trying to rest up so I could actually make it to the ridiculously expensive NYE party we had already purchased tickets for. At a about 2pm I started to come back to life, very slowly. We started hitting the champs at about 4pm, which always tends to perk me up a bit. We had a little pre-party that consisted of our host, Dan, and 6 chicks – only one of which he is sleeping with. I think. One of his coworkers was there w/ a friend of hers. She was already drunk (I hope) and quite entertaining. She was bitching (in a funny way) about how her friend just cancelled a NYE party on her and she had nothing to do. Turns out, that party was still on, she was just disinvited because she hooked up with one of the guys throwing the party the previous weekend and woke up the next morning asking him “what are we??”. That is like “How to freak a dude out 101” girlfriend. Amateur hour.

At around 6pm, Stina and I headed out to The Rocks so we could get a good table at our party for the fireworks. We were, of course, 30 minutes early, so we grabbed a drink and hopped in the queue. There was a bit of line drama with people trying to cut. Shockingly someone else put the douchebags in their place before I had to do it myself. And thank god, because I needed all the energy I could muster so I could make it to fireworks without collapsing. But let the record show, I would have slapped a bitch if need be. We grabbed one of the few coveted tables with a great view of the Opera house and had to guard it with our lives for the next hour and a half until Stina’s friends (same group from Queenstown) arrived an hour late. I am obviously cringing as I say this, because you all know how I feel about punctuality. Needless to say, I was stressed. But since I’m trying to be “go with the flow Rory” I decided to heed T-Swift’s advice and shake it off. While we were guarding our table, this one fat chick kept putting her fucking drinks down, as if she thought the table was now hers. So I basically had to have an ass pushing competition with this bitch for an hour. It wasn’t so much the fact that she put her drink on my table that bugged me as it was that she was offensively ugly and I just don’t really like ugly people around me. It brings down the average of everyone in close proximity. Kind of like a really shitty house on a nice block. And if you were are using someone’s table, wouldnt general etiquette dictate a courtesy ask? We also had a mail-order bride with entitlement issues that rivaled the Kardashians trying to get at our table. She was escorted by a super old white guy with yellow fever and kept taking the smallest sips of champagne and putting her drink on our table. I thought Stina was going to punch the bitch out, but instead she just spit in her drink and we giggled the next time she took a sip. Mean girls ain’t got shit on us.

The party was open bar until 10:30pm and passed hour’derves which we all took full advantage of. They were actually quite generous with both, and thank god, because at AUD 280 I might have flipped out on someone if I had to wait 30 minutes for a drink. Nothing too crazy or exciting happened. It was actually a pretty mellow party. I didn’t end the night crying, so I have deemed it a success. To give you some background on my expectations – I fucking hate NYE. With a passion. That shit never lives up to the hype and I usually find myself shit faced in a bar, covered in glitter, trying to find my phone and/or friends. I think last year I sat on the couch with Jorgie eating carbs in my pj’s and we barely made it till midnight – and that was prob the best NYE I had in about 5 years. We were home shortly after 2am, after getting drunk Stina some McDonalds. No one lost their shit or puked. Perhaps this is maturity? if so, it’s painfully overrated.

Happy New Year everyone! 2015 is going to fucking rock!! Let’s just enjoy this moment when we can tell ourselves how great the next year will be and actually believe it. Because you know in 364 days we’ll be saying “Fuck 2015! 2016 is my year!”. Do you want to know what my 2015 resolution is? To marry rich. Yes, I want to lose weight, find a job I actually like making great money, lose more weight, and try to be more positive. But marrying rich would really kill all those birds with one stone. And you know I’m always one for efficiency.

Today we took the ferry over to Manly Beach. We passed by the Microsoft Mega Yacht on the way there. It is either owned by the Company or some big shot at the Company (or so we were told).

I have included a pic of it – and yes, that is a fucking helicopter on the back of it. Apparently there are multiple submarines included as well. This can all be yours for the price of $200 million and $20 million a year in upkeep. For the record, when I say marry rich – this is the rich I’m talking about. Just in case a genie in a bottle is reading this, I want to clarify. We seriously considered jumping off the ferry, swimming up to it and pretending like we were drowning. But those rich fuckers on board would probably have just sipped their Champagne and laughed at us as if someone arranged for a show where sharks eat us lowly poor humans purely for their entertainment.

Manly was pretty cool – more laid back than Bondi, which is fucking nuts. Had a bit of a Hermoa Beach vibe, just a bit bigger and more touristy. But today it was pretty crowded, and the jellyfish were out in full force so no swimming for us. All I wanted to do was get shit faced because I was finally feeling a bit better and what the hell else do you do on new years day? So we spent most of the day in bars (shocking, I know). If there is one thing I have learned while in Sydney, it’s that all the hot men are either working the bar or waiting your table. Seriously – hottest waiters I have ever seen in my life. Stina and I actually considered inviting a French bus boy home with us but then thought better of it. We made a quick stop at Opera bar on the way back to bid adieu to Sydney in style. On the way home, Stina wanted to get rid of some of her change. She counted out all the useless two cent coins taking up so much room in her purse, ready to throw them on the floor of the cab. Luckily, Dan and I realized these annoying little coins were actually two DOLLAR coins and stopped her before she chucked about $20. It doesn’t sound so funny now – nothing is as funny when sober. Perhaps the alcoholics are on to something there.

We were in bed by 10pm, as we had to be up at 5am for our flight to the Gold Coast tomorrow. Back to being real backpackers again. The downside is we have no family and friends to take us around and show us the sights. Good news is that showering is optional when backpacking.

One thought on “Happy NYE in Sydney!”